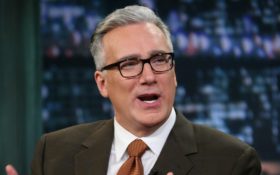 Disgraced former NBC star Keith Olbermann, the liberal news anchor that feuded with Fox News star Bill O’Reilly for nearly a decade, has been using his nightly news program to lead the so-called “resistance” against President Donald Trump since the Inauguration.

Monday, Olbermann abruptly quit the popular social media news show “The Resistance with Keith Olbermann”… because he was too beaten to continue.

Another win for Trump, it would seem.

Bizarrely, Olbermann refused to acknowledge he was defeated by Trump. Instead, he used his last program to declare victory for the alt-left — and predicted Trump would be impeached for referring to Massachusetts Sen. Elizabeth Warren as “Pocahontas.”

NEW VIDEO: After “Pocahontas,” Trump’s an ex-president waiting to happen – imminently. So this will be the last episode of #TheResistanceGQ. If you’re a political account and I unfollow you it ain’t personal. And I recommend everybody follow @ddale8 pic.twitter.com/NzguN6uvL3

“I am confident now, even more so than I have been over the last year that this nightmare presidency of Donald John Trump will end prematurely and end soon, and I am thus also confident that this is the correct moment to end this series of commentaries,” Olbermann said. “This ballgame is also over and I don’t think it’s going to last another 13 months. And so this series is over.”

Sponsored: The simple way to empty your bladder – instantly

This wouldn’t be the first time Olbermann has been abruptly let go, after all.

In 2011, he was fired from his MSNBC primetime show for making unethical campaign contributions to Democratic lawmakers.

The next year, he was fired from Current TV, a liberal news station partially owned by Al Gore.

After firing Olbermann, the left-wing outlet released the statement: “Current was also founded on the values of respect, openness, collegiality, and loyalty to our viewers. Unfortunately these values are no longer reflected in our relationship with Keith Olbermann and we have ended it.”

In 2015, a year before launching his online “resistance” movement, Olbermann was fired from ESPN.

Critics say the firing is justice.

After all, Olbermann is the kind of character that claimed Trump and his family had done more damage to America than Osama Bin Laden did on Sep. 11, 2001.

No wonder he can’t keep a job.

Do you think Keith Olbermann was fired?