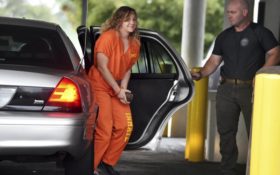 She hates America, despises President Donald Trump, and admitted she wanted to commit domestic terrorism before she fled to the “Christlike” Taliban.

That’s not our description – that’s from the personal writings of the woman who admitted to hacking the NSA and releasing classified information so she could embarrass the president.

The 26-year-old woman, Reality Winner, will serve 63 months in prison under a plea bargain she made last Thursday. That’s the longest sentence ever handed out for her offense of the Espionage Act.

Winner, the daughter of a left-wing activist, abused her Air Force service to leak national secrets.

Winner’s mother, Billie Winner-Davis, is a far-left activist who regularly takes part in a demonstration called the #KremlinAnnex, which accuses Trump of treason.

It looks like her upside-down morality helped send her daughter to the big house.

Winner joined the Air Force and researched how to sneak classified information off-base. Then she applied for a job that would give her access to national secrets.

As soon as Winner found a way to get to Fort Gordon, she searched for classified information that had nothing to do with her job. Before her discharge, she stuck a thumb drive in the Air Force computer and downloaded an unknown number of national secrets.

She left the military, but took a job as a government contractor, where she had even more access to top-secret material.

That’s scary, because the young woman – who speaks Arabic, Farsi, and the dialects spoken in the parts of Afghanistan controlled by al-Qaida terrorists – said she wanted to burn down a national monument.

“I want to burn the White House down,” wrote Winner, “find somewhere in Kurdistan to live.”

The shocking confession was in a notebook Winner kept, according to Assistant U.S. Attorney Jennifer Solari.

Winner said it was just a joke. But the judge presiding at her trial read Winner’s description of al-Qaeda’s sick, terrorist beliefs as “a Christlike vision to have a fundamentalist Islamic state.”

Winner also said, “Look, I only say I hate America like 3 times a day.” And she called Trump a “soulless ginger orangutan.”

The left-wing propaganda, her parents, and the Hate-Trump media, set her up for years in an orange jumpsuit.

She mailed a copy of a classified report – a report that Russians tried to hack U.S. election officials before the 2016 election – to an online news site called “The Intercept” – and since it made Trump look illegitimate, the media have made her a hero.

There’s no question over her guilt. Before agents even arrested her, Winner admitted, “Yeah, I screwed up royally.”

She also told her mother during a recorded call from jail, “Mom, those documents – I screwed up.”

But they hatched a plan: In a phone call from prison, which authorities recorded, Winner said she planned to go to court and “play that card: being pretty, white and cute.”

When the judge revealed that he knew about the tape, Winner – a CrossFit and yoga instructor – switched strategies. She suddenly developed bulimia and depression in prison.

The bulimia didn’t win her any sympathy from the judge, so she copped a plea and told the court, “My actions were a cruel betrayal of my nation’s trust in me.”

Ex-NSA contractor to spend 63 months in jail over “classified” information. Gee, this is “small potatoes” compared to what Hillary Clinton did! So unfair Jeff, Double Standard.

After all, Crooked Hillary hasn’t served any jail time for her homebrew e-mail server, which leaked national secrets right-and-left when she was Obama’s secretary of state.

But media outlets were absolutely serious in defending Winner. Fake News CNN’s Jake Tapper asked why she went to prison at all —

.⁦@Will_Bunch⁩ asks why Reality Winner is in jail if we’re a nation that protects whistleblowers https://t.co/JvcTAjOxBY

Conservative journalist Sean Davis of The Federalist set Tapper straight: Winner isn’t a whistleblower, because she went out of her way not to call herself a whistleblower.

Still, the L.A. Times called the raging national security threat “prodigiously intelligent” and a “hero-antihero” after her sentencing.

In an age of  Trump, “what does it even mean anymore to be a patriot or a traitor?” the paper asked.

For the anti-Trump media, a real hero is someone like Winner – a confused and brainwashed leftist who hates her own country so much that she threatened to destroy the White House, leaked classified information, and compared Osama bin Laden’s terrorists to the 12 apostles.