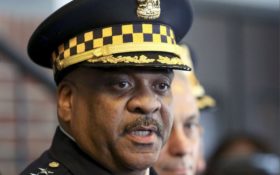 Chicago Mayor Lori Lightfoot fired Police Supt. Eddie Johnson on Monday, saying her decision was based on his “ethical lapses.”

The police boss, a Democrat well-known for boycotting a Trump-attended police officer conference in October, is out of the door after three years on the job.

Lightfoot said she decided to fire Johnson after reviewing an inspector general’s report on its investigation into a recent incident in which he was found asleep behind the wheel of his SUV.

He’d first said that a mix up in medication made him dizzy.

It turns out, he may have just been mixed up by a little too much of the spirits.

According to NBC Chicago 5, Lightfoot claims that Johnson lied to her about specifics surrounding the incident, and that he admits he’d had several drinks with dinner before he’d passed out.

“Mr. Johnson was intentionally dishonest with me and communicated a narrative replete with false statements regarding material aspects of the incident that happened in the early morning hours of October 17,” Lightfoot said in a statement.

“Had I known all the facts at the time, I would have relieved him of his duties as superintendent then and there.”

Johnson announced in November that he would retire at the end of the year after more than 30 years with the department.

Johnson, a native Chicagoan, held just about every rank on the police force.

He was named superintendent in 2016 by then-Mayor Rahm Emanuel, who had fired Superintendent Garry McCarthy after the release of the now-infamous video of Officer Jason Van Dyke fatally shooting Laquan McDonald and was scrambling to restore confidence in both himself and the department.

You can read Lightfoot’s letter to the Chicago Police Department below:

While I recognize this news comes as a surprise to most of you, this was a decision I felt was absolutely necessary to preserve the legitimacy and honor of the Chicago Police Department. I deeply respect the work that each of you undertake every day and you deserve a Superintendent who lives up to the ideals that I expect each of you to exemplify. I will address command staff later today to discuss my decision and look forward to working with Interim Superintendent Beck and First Deputy Riccio to ensure that the highest standards of ethical behavior are supported throughout the Department.