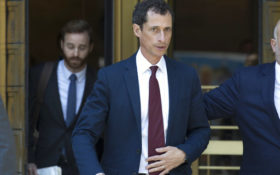 Former U.S. Rep. Anthony Weiner has had an embarrassing career – to say the least.

And it just got a lot worse.

This Clinton pal was crying like a baby in court Friday as he apologized to the 15-year-old girl with whom he exchanged sexually explicit texts.

The judge accepted Weiner’s guilty plea Friday to a charge of transmitting sexual material to a minor.

He agreed to not appeal any sentence between 21 and 27 months in prison, which critics argue isn’t nearly enough for the convicted creep.

The Democratic former congressman apologized to the 15-year-old, saying, “I have a sickness, but I do not have an excuse.”

The judge told him he would have to register as a sex offender.

The FBI began investigating Weiner in September after the 15-year-old North Carolina girl told a tabloid news site that she and Weiner had exchanged lewd messages for several months.

As if that’s not bad enough, the minor also accused him of asking her to undress on camera.

This comes after a string of sexting scandals for Weiner, who was caught in August sending explicit images while his toddler was in the bed with him, The Horn News reported.

And these aren’t the only scandals Weiner is wrapped up in.

A search warrant was issued for his laptop by the F.B.I during failed Democratic nominee Hillary Clinton’s email scandal, after there were concerns that his wife and Clinton top aide Huma Abedin had sent him classified material.

Jail time will likely be good for this sex offender – who can’t seem to stay out of a scandal.