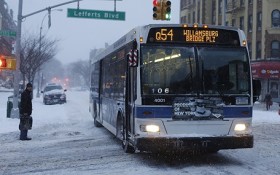 New York City transit officials say a passenger angry that a bus driver told her to stop smoking took the vehicle for a brief joy ride.

Metropolitan Transportation Authority spokesman Kevin Ortiz says the bus driver noticed the woman smoking, asked her to extinguish her cigarette and asked her to get off the bus shortly after 7 a.m. Tuesday on Manhattan’s upper East Side.

Ortiz says the woman became irate and the driver began transferring riders to another bus.

But he says the woman jumped into the driver’s seat and started driving off.

Ortiz says the bus went about four blocks before a dispatcher managed to reach through the window and shut it off.

The woman was taken to a hospital for psychiatric evaluation. Police say charges are pending.