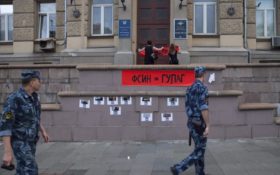 An activist from Russian punk collective has led a protest outside the headquarters of the state penitentiary agency to protest torture and slave labor in Russian prisons.

Maria Alekhina and activist Dmitry Tsorionov put banners and photos of inmates who were reportedly beaten by prison personnel on the Federal Penitentiary Service building in Moscow.

Tuesday’s protest comes amid public outrage stoked by a recently released video of an inmate being beaten by men in guards’ uniforms while lying handcuffed on a table.

Several guards have been put in custody while the 2017 beating is being investigated.

Alekhina and bandmate Nadezhda Tolokonnikova spent nearly two years in prison for an anti-Putin protest inside Moscow’s Cathedral of Christ the Savior in 2012.