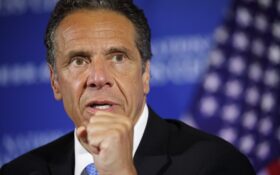 If Americans needed a reminder of how important big cities are, we just got one in Georgia.

Democrat Raphael Warnock and Republican Herschel Walker seemed neck-and-neck until the last minute when the final results came in… from Atlanta.

The metro Atlanta area alone made up an outright majority of votes cast in the Georgia runoff election this week, according to a county-by-county breakdown of votes by The Washington Post.

As much as conservatives hate to think about it, cities matter—a lot. And if that’s true, America is in trouble.

New York City, in particular, has a host of problems. It’s been waging a war on rats for decades, and experts say the rats are winning.

The Mafia is riding high from its cigarette-smuggling operation in the Big Apple—the largest in the country—thanks to the city’s enormous taxes on tobacco and soft drinks.

With all these problems, and many more, what is the mayor concentrating on?

Partying with an accused sex offender.

Democratic Mayor Eric Adams recently decided to party down with former Governor Andrew Cuomo for the disgraced ex-gov’s 65th birthday on Tuesday—and the mayor wasn’t even on the guest list.

Adams dropped in uninvited to show his support for Cuomo, who resigned last year after being accused of groping, fondling, and sexually harassing around a dozen women in the governor’s mansion.

At the time, Adams demanded Cuomo resign from office and called on the “New York State Assembly to take swift and appropriate action and move forward with impeachment proceedings if the governor will not resign.”

But it looks like all is forgiven now. “The vibe in the room was an outpouring of love and friendship,” an eyewitness told the media.

In fact, it looks like there’s more than socializing going on: Adams and the former governor have been meeting together regularly for months.

Adams and Cuomo ate together in a ritzy Manhattan restaurant in February, then again at the French restaurant Le Pavillion in April.

It could be Adams just likes to hang out with shady characters.

The owners of Adams’ favorite restaurant, Osteria La Baia—where Adams and Cuomo met in February—are convicted crooks guilty of massive financial impropriety, including money-laundering. The brothers, Johnny and Robert Petrosyants, are close, personal friends of Adams—and they’ve wrongly received $1.2 million in COVID bailouts, stiffed the city with $1.4 million of unpaid taxes and used fronts to illegally get a liquor license, according to an investigative report from this week.

What a perfect setting for a meeting with Andrew Cuomo.

It turns out the mayor and the former governor discussed more than crème brulee: Adams said Cuomo gave him some “creative ideas” for running New York City—and how to get money from the state.

That could be terrible, considering more people left New York while Cuomo was governor than any other state.

But it turns out Cuomo was helping Adams learn how to play state legislators to get the most money for his failing city.

“He gave me some creative ideas on how to deal with the budget, how to present to Albany next week on getting resources to the city,” Adams said.

It’s not just money: Adams has already appointed former Cuomo staffers deep into his administration: His current and former chief of staff both worked for Cuomo.

Is Cuomo offering Adams a deal, in which he helps Adams get all the state funding he can wrangle? If so, what does he want from the mayor?

The Horn reported that Cuomo desperately wants to make a comeback in politics, just like his brother Chris made in the media when he scored a new show on NewsNation.

Getting Adams on board would be a major boost against the incompetent and unpopular Democratic governor, Kathy Hochul.

But why is Adams meeting with Cuomo and staffing his office with people loyal to Cuomo? Are they cutting a deal for him to move up in New York politics?

If so, Adams could have a bright national future in the Democratic Party, which has no real stars or standouts at the moment.

The media would love to catapult Adams into stardom, just as it did with former Mayor Michael Bloomberg.

And that’s where what happens in big cities affects you.

America is in deep trouble—but many people have no idea how deep, because they live in normal places.

But sooner or later, the big cities weigh in. Their ballot-harvesting can outweigh the number of people who show up in your church on Election Day to cast their ballot and support the local church’s Election Day dinner.

Their leaders ruin their cities, hang out with crooks, take advice from failed perverts, then try to get a leg up to run for national office… where they can impact your life, and your grandchildren’s lives, for years.

The cities have had their say. America needs to get back to heartland wisdom before it’s too late.