Oscar buzz! Who got a nod and who got snubbed - The Horn News 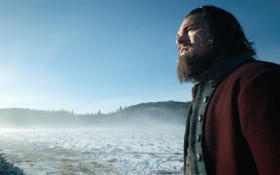 A year after Alejandro Inarritu’s “Birdman” swept top honors at last year’s Academy Awards, Inarritu will again play a leading role at the Academy Awards with his 1820s revenge thriller “The Revenant,” which landed a leading 12 nominations Thursday.

Other familiar faces are returning, as well, like last year’s best actor winner, Eddie Redmayne (“The Danish Girl”), Jennifer Lawrence (a record fourth nomination for the 25 year-old for “Joy”) and mainstay composer John Williams, who notched, staggeringly, his 50th nomination.

But absences were also stuck on repeat. A year after coming under withering criticism over a lack of diversity, the Academy of Motion Pictures Arts and Sciences again fielded an all-white group of 20 acting nominees, restoring the trending hashtag “OscarsSoWhite” to prominence. That story line should have a new twist this time, though, when Chris Rock — who famously labeled Hollywood “a white industry” — hosts the Feb. 28 ceremony.

Other showdowns await, too.

In a tumultuous and unpredictable awards season, “The Revenant” — which also landed nominations for best-actor favorite Leonardo DiCaprio, Tom Hardy and Inarritu’s long-take maverick cinematographer, Emmanuel Lubezki — has emerged as a heavyweight, taking top honors at the Golden Globes and scoring a $38 million debut.

“Champagne and mezcal will run tonight!” said Inarritu in a statement from London.

Left on the outside were Todd Haynes’ lesbian romance “Carol” (which fared better in acting nominations for Cate Blanchett and Rooney Mara) and the N.W.A biopic “Straight Outta Compton” (which still landed a nod for original screenplay). The miss for “Carol” meant one usual Oscar heavyweight — Harvey Weinstein — won’t have a horse in the best picture race for the first time since 2008.

In front of and behind the camera, diversity remains a widely acknowledged problem for the movie industry, and few films starring and directed by minorities were seen as contenders. But many expected “Straight Outta Compton” to be nominated for best picture, and numerous handicappers had Idris Elba for “Beasts of No Nation” and Benicio Del Toro for “Sicario” as likely for best supporting actor.

Academy president Cheryl Boone Isaacs, who had led efforts to diversify the academy’s memberships, acknowledged she was “disappointed.”

“What is important is that this entire conversation of diversity is here and that we are talking about it,” said Isaacs. “Talking gets to the doing, and we are going to do.”

Ryan Coogler’s acclaimed Rocky sequel “Creed,” starring Michael B. Jordan, was also often cited as one of the year’s best, but it drew only a nomination for Sylvester Stallone reprising his role as Rocky Balboa.

“I am incredibly humbled by this honor,” Stallone, first nominated for the role in 1977 for “Rocky,” wrote in an email. “I was not expecting it … especially at this time in my life.”

Alongside DiCaprio and Damon, the best actor nominees were: Michael Fassbender (“Steve Jobs”), Redmayne (“The Danish Girl”) and Bryan Cranston (“Trumbo”). Two big names were left out: Johnny Depp for “Black Mass” and Will Smith for “Concussion.”

The best actress field is led by favorite Brie Larson for “Room,” along with Lawrence, Blanchett (her seventh nod), Saoirse Ronan (“Brooklyn”) and Charlotte Rampling (“45 Years”).

Also nominated for best supporting actor were Mark Rylance, best known for his stage work, for “Bridge of Spies” and Christian Bale (“The Big Short”).

Nominees for best director shunned not just one filmmaking legend in Scott, but also Spielberg. Instead, Lenny Abrahamson for “Room” was the unexpected addition along with Adam McKay, known best for his broader Will Ferrell comedies, for “The Big Short.”

“It was thrilling,” said McKay, who made a pre-dawn party to watch the nominations. “We were screaming like idiots in the pitch black with the smell of waffles in the room.”

Following a record $11 billion year at the box office, the academy still kept the year’s biggest hit — J.J. Abrams’ “Star Wars: The Force Awakens” — out of the major categories, instead nominating it for five technical awards. “Star Wars” may have set a domestic box office record with $822 million and counting, but “Room,” with a minuscule $5.2 million to its name, was the bigger Oscar force.

Netflix’s first original feature, Cary Fukunaga’s “Beasts of No Nation,” was shut out. (Netflix did, however, again break into the documentary category with three nods.

Along with Mara and McAdams, the best supporting actress nominees were Alicia Vikander (“The Danish Girl”), Jennifer Jason Leigh (“The Hateful Eight”) and Kate Winslet (“Steve Jobs”), her seventh nod.

For the first time in years, as many as five films — “The Martian,” ”Spotlight,” ”The Revenant,” ”Mad Max” and “The Big Short” — will have a legitimate shot at best picture. The odds of an Inarritu repeat, though, are against him. No filmmaker has ever directed back-to-back best picture winners.