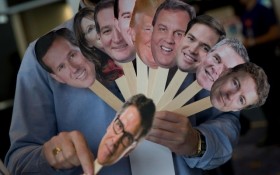 Former Texas Gov. Rick Perry was the first victim of the ruthless GOP presidential campaign, and officially dropped out of the Republican race Friday.  Now that the blood is in the water, the political sharks are circling other candidates who are struggling to stay afloat and are running out of money fast.

So who will be the next major candidate to go? It’s starting to look like former Senator Rick Santorum.

In fact, given Santorum’s polling numbers and cash situation, it would not be surprising to see him exit the race shortly after appearing on the under card on this week’s GOP debate.

Iowa polls show Santorum’s campaign is, in effect, already over, and barely 1% of Iowa caucus goers say they’re supporting him.

The news is just as bleak nationally.  Santorum lacks the support to get on the main stage of the September 16 Republican debate, which is hosted by CNN and will only take the top 11 candidates.  This debate will be key to gaining headlines needed to fuel any serious comeback bid, and without it, Santorum is likely stuck in polling limbo.

The same poor polling numbers can be said for many other candidates, like Louisiana Gov. Bobby Jindal and former Arkansas Gov. Mike Huckabee.  But the key difference is in funding levels.

Santorum  has burned through most of his campaign donations already; he has a paltry $200,000 left, which is reportedly less than Perry had when he dropped out of the race.  Unless something shakes up differently, and soon, Santorum is a prime candidate to follow Perry’s surrender.