Analysis of the bloody battle for Sinjar - The Horn News 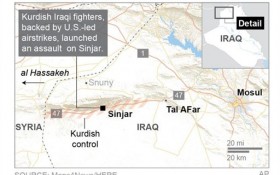 Under the guidance of US special forces, Kurdish Iraqi fighters launched a long-awaited offensive against the Islamic State to retake the strategic town of Sinjar Thursday.

In the first hours of the battle, these Kurdish forces seized control of one the extremist group’s key supply lines into the town.

Here’s a look at Sinjar, which was overrun by the ISIS last year, and the town’s importance in the overall battle against the Sunni militant group:

Sinjar was captured by the Islamic State group in August 2014, shortly after the extremists seized Iraq’s second-largest city, Mosul, and blitzed from Syria across northern Iraq. Once in Sinjar, IS inflicted a wave of terror against the minority Yazidi community, members of an ancient religion whom the Islamic State group views as heretics and accuses of worshipping the devil.

Since then, the name Sinjar has evoked images of tens of thousands of terrified Yazidis fleeing into the mountains, where the militants surrounded them, leaving them trapped and exposed to scorching summer heat. The crisis prompted the United States to launch aid drops to the stranded. An untold number were killed in the assault, and hundreds of men and women were abducted — the women subsequently enslaved and given to IS militants across the group’s territory in Iraq and Syria. Many of the men were believed killed, others forced to convert. Some of those stranded on nearby Mt. Sinjar were rescued by Syrian Kurdish fighters, others eventually escaped after Kurdish fighters opened a corridor for them to the northeast.

The massacres in Sinjar prompted the U.S. to launch the first round of airstrikes on Aug. 8, in what would mark the beginning of a broader coalition effort to battle the militant group in Iraq and Syria.

Sinjar is important because of Highway 47, which lies alongside the town and links the Islamic State group’s two biggest strongholds — Raqqa in Syria and Mosul in northern Iraq. The 120 kilometer (75 mile) -long highway has been one of the most active supply lines for ISIS, a major conduit for goods, weapons and fighters.

The main objective of the Kurds is to cut off this route, and U.S.-backed Kurdish fighters on the Iraqi and Syrian sides of the border are now fighting to retake parts of that corridor. Cutting the road will significantly slow ISIS movement, forcing the militants to use back roads and a more than 400 kilometers (250 miles) of mostly desert road to make up for it.

The battle for Sinjar, depending on how long it takes, will also be an indication of how future battles could play out, including those to retake other IS strongholds such as Tal Afar and Mosul in Iraq, and Raqqa in Syria.

Broadly, the Sinjar offensive is led by Kurdish Iraqi fighters known as the peshmerga troops. They are backed by a U.S.-led air campaign and advisers on the ground.

But there are also Kurdish factions from Syria and Turkey involved, and keeping the peace and coordinating among them may be one of the biggest obstacles to a successful operation. Each faction makes competing, ancestral claims to the Sinjar Mountain, where the Kurdish-speaking Yazidis believe that Noah’s ark came to rest.

The factions include the Turkey-based Kurdish Workers’ Party or the PKK, the Syria-based People’s Protection Units better known as the YPG, and Yazidi-led fighters who have dubbed themselves as the “Sinjar Resistance.”

The Sinjar offensive coincides with an offensive by U.S.-backed Kurdish forces in Syria to retake ISIS-held areas in the southern parts of Hassakeh province, across the border from the Sinjar region. One major objective of that campaign is to capture the Syrian town of Hol, which overlooks the route connecting to Iraq’s Highway 47.

The town of Sinjar, at the foot of Sinjar Mountain about 30 miles (50 kilometers) from the Syrian border, is not an easy target. An attempt by the Kurds to retake it stalled in December. The militants have been reinforcing their ranks in Sinjar recently in expectation of an assault.

Because of its strategic importance, the militants will likely put up a fierce fight to hang on to it. In comparison, the battle for the Kurdish town of Kobani in northern Syria, took about four months — despite hundreds of U.S. airstrikes backing up the Kurdish fighters.

Once in control of the road, the Kurdish peshmerga troops are likely to advance toward the town from three sides. To the northeast of the town is the mountain, which the Kurds now hold. But coming down Mt. Sinjar to approach the town from that side as well will also present significant a challenge for the Kurdish fighters as its steep, windy roads leave the troops vulnerable to mortar fire.

And once in the town itself, the Kurdish fighters will face intense street-to-street battles with ISIS militants.