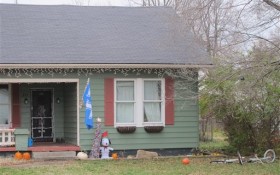 The stabbing death of a kindergartner asleep in his home has plunged a Kentucky town into mourning, and shaken neighbors are rallying around the family even as they worry about their security. A man from Indiana described by authorities as having no apparent ties to the town or family has been charged with murder.

The death of the 6-year-old boy has police, neighbors and family in this small community of Versailles puzzled after the man from 200 miles away in Indiana was arrested and accused in police documents of repeatedly stabbing the boy in the head with a large kitchen knife. No motivation in the killing has been reported by authorities.

“It kind of hits close to home when it’s a couple houses down from you,” said neighbor Tiffany Crow, who is now thinking of buying more locks for her home.

Logan Tipton was killed before dawn Monday when the intruder broke into his home, grabbed a large kitchen knife and stabbed the boy, police said.

“Babies aren’t supposed to have anything like this happen to them,” said the boy’s aunt, Melissa Pujol. “You can’t make sense of it. You just have to try to get through it. We’re just trying to get through it.”

Logan was a happy child, always smiling, she said. He loved to play football.

Police said Ronald Exantus, 32, of Indianapolis is accused of breaking into the house where the boy lived with his parents and siblings in Versailles, near Lexington in Kentucky’s thoroughbred and bourbon country. The police citation alleges Exantus wandered around after gaining entry, then headed to an upstairs bedroom where the boy was asleep, stabbing him several times in the head.

Exantus has been charged with murder and first-degree burglary. He appeared in a Woodford County courtroom and entered a plea of not guilty Monday with bond set at $1 million by District Court Judge Vanessa Dickson.

“We’re all kind of bumping our heads again a wall; it’s mind-boggling,” said Versailles police Lt. Michael Fortney. “It’s a child who had no opportunity to defend himself.”

Christmas lights and decorations, including a Snoopy wearing a Santa hat, adorned the small frame house where Logan had lived with his family. Two bikes and a basketball were strewn in the front yard. Neighbors said Logan and his siblings would be outside playing whenever weather permitted. Nearby are a couple of churches, one with a front yard sign reading: “Jesus is the reason for the season.”

The town has rallied around Logan’s family.

Laura Burton Lacy, a family friend, set up an online fundraising account to raise money for his funeral, counseling for his siblings and other expenses. Community members collected $15,000 in just a few hours alone.

The family plans to move out of their house in the neighborhood.

Two of the boy’s sisters suffered non-life-threatening cuts in the attack, and the suspect was held by the boy’s father until police arrived, the arrest citation said. The boy’s family told police they have never seen Exantus before.

“The family did all that they could,” Pujol said.

Fortney said police have found nothing to connect Extanus to the family or to the town.

Hours after the killing, an attorney appointed to represent Exantus questioned his mental competency. Bridget Hofler said at her client’s arraignment that he was unresponsive when she asked him about his background and family. He didn’t know his mother’s phone number nor could he tell her his occupation or what he was doing in town, she said.

“I have discussed various things with him on two separate occasions this morning and he’s not able to really discuss anything; he’s not here,” Hofler told reporters afterward.

She told the judge she has heard her client is a registered nurse, but has been unable to confirm that. The Indiana Professional Licensing Agency lists a Ronald Exantus of Indianapolis as having an active nursing license.

Logan was a kindergartner at Simmons Elementary in Versailles. His classmates were told he had died, but not about the circumstances of his death, said county schools Superintendent Scott Hawkins.

“He was extremely well liked,” Hawkins said of the boy. “He had a lot of friends at the school. Just a great, great little boy, and one that you certainly loved having in your building.”