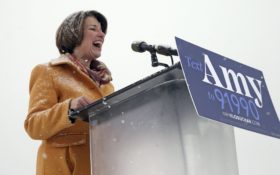 Klobuchar has surged in the polls after a strong New Hampshire primary performance. In an increasingly far-left Democratic Party, Klobuchar says she’s a moderate.

She’s banked her entire 2020 Democratic presidential nomination campaign on the idea that she’s the strongest opponent to President Donald Trump.

An unearthed 2006 video could be her undoing. The footage shows Klobuchar talking about the need for order on the U.S.-Mexico border.

And she endorses a border wall to stop illegal immigrants. She says immigrants need to speak English before they’re given citizenship.

“I do believe that we need more resources at the border, and that includes a fence,” she said when asked about then-President George Bush’s plan for a 700-mile border wall.

“We need to get order at the border,” she added.

“We also have to stop giving amnesty to companies that are hiring illegal immigrants. Under this administration the number of prosecutions of companies has gone way down – that has to change,” she said.

Totally reasonable to most voters.

But in the unforgiving world of liberal “social justice,” implying that Trump is right — and the U.S.-Mexico border needs a wall — is political suicide.

The video’s release comes just days after Klobuchar’s strong Tuesday showing in New Hampshire, which counted as a victory for a candidate who spent much of the campaign boasting about being in the “top five” of the crowded field.

For much of the race, Klobuchar has lagged toward the back of the pack in fundraising and had just under $5 million in reserve at the end of 2019 –- far less than all other leading contenders. Her goal coming out of Friday’s debate was to raise $1 million, a lifeline that would allow her to forge on in contests ahead. She quickly reached that amount and, to her own surprise, she doubled it within 24 hours.

By Tuesday, her campaign said that sum had climbed to $4 million.

She raised an additional $2.5 million after polls closed Tuesday, with about 60% of donations coming from first-time donors, which the campaign called a sign that her message is resonating with voters and that her campaign has room to grow.

Unlike the other leading contenders in the race, Klobuchar is the only candidate who is not getting extra help from a super PAC or outside group, which can raise and spend unlimited sums so long as they do not coordinate advertising spending decisions with the candidate they support.