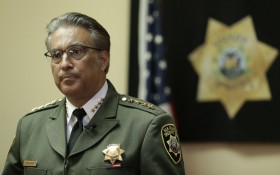 A San Francisco sheriff that was caught up in a national debate on illegal immigration has lost his bid for re-election by a wide-margin. Sheriff Ross Mirkarimi was charged with domestic violence five days after he was sworn in as sheriff – later pleading guilty to a charge of false imprisonment – which lead some critics to label him “America’s worst sheriff”.

Mirkarimi lost Tuesday in a landslide to retired sheriff’s official Vicki Hennessy. She has the backing of Mayor Ed Lee and the deputies association.

With more than 90,000 votes counted, Hennessy had 62 percent compared to just 31 percent for Mirkarimi.

Mirkarimi had been a defender of the San Francisco’s sanctuary city policies, which generally prohibit law enforcement from cooperating with immigration officials. He came under national scrutiny when he released an illegal immigrant who later was accused of randomly killing a young woman.

Mirkarimi had his officers release Juan Francisco Lopez Sanchez after a years-old arrest warrant on marijuana charges against him was dismissed, despite a federal immigration request asking them to hold him until U.S. authorities could take him into custody for deportation proceedings.

Sanchez is accused of then murdering a 32-year-old woman July 1 while she was walking along a city pier with her father.

Sanchez was in the U.S. illegally and had been deported five times.

After he was arrested in the death of Kathryn Steinle it was revealed Sanchez had seven felony drug convictions.

This isn’t the only scrutiny of the San Francisco Sheriff’s office. They have been under close watch since last summer when a Mexican national in the country illegally was charged with the fatal shooting of a San Francisco woman.