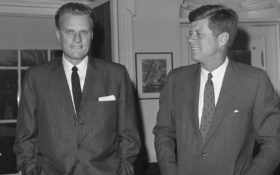 He was rebuffed, then embraced, by Harry Truman. Confided in — and deeply hurt by — Richard Nixon. A source of reassurance for George H.W. Bush on the eve of war. The spark that finally turned George W. Bush toward sobriety.

The Rev. Billy Graham, who died Wednesday at age 99, was a fixture of the presidency to every man who has held the office back to the early years of the Cold War. He met all 12 of them, plus Donald Trump before he ran for office, and counseled most as they grappled with governing, politics and peace of mind.

Though most presidents have sought guidance from spiritual leaders, Graham’s role at the top echelons of American politics was unique, and there’s no obvious successor likely to fill his shoes as an adviser to leaders from both parties. The evangelical movement he helped turn into a political force is now most closely aligned with the Republican Party, including Trump, who has been publicly backed by numerous evangelical leaders.

“Many of the public religious figures are known in the public because of their stances politically,” said Mark Noll, an evangelical scholar at the University of Notre Dame. He said the current political and media polarization “makes it harder for a figure like Graham to emerge.”

For some of the presidents he advised, Graham offered more than just prayers, support and photo opportunities. Depending on the White House occupant and the era, he was a friend, negotiator and shrewd political adviser.

His first overtures to a president were rebuffed. His star rising, Graham pressed Truman, a Democrat, to attend his Washington crusade in 1952. But Truman wanted no part of Graham, whom he at first considered a publicity hound. After Truman left the White House, he received Graham at his home in Independence, Missouri, according to Graham’s website.

He had better luck with Truman’s successor, Republican Dwight D. Eisenhower. Graham urged Eisenhower to run for president and counseled him about the afterlife.

His close friendship with Nixon began in the late 1950s, before the Republican landed in the White House. The match was glued by their disdain for communism, Graham’s belief that Nixon was a man of high moral character— and both men’s ambitions. Graham considered endorsing Nixon in the 1960 election against Democrat John F. Kennedy, when Kennedy’s Catholicism became a divisive issue.

“I think the true story with Graham was he was far more partisan that he’s ever let on in public or that’s ever come to light,” said Randall Balmer, a Dartmouth College historian and author of “God in the White House.”

When Kennedy defeated Nixon, Graham agreed to play golf with the president-elect at the Kennedys’ Palm Beach, Florida, estate and drove around in Kennedy’s white Lincoln Continental.

“He missed a putt and Kennedy said, ’Well, I thought you were a good golfer,’” said Grant Wacker of Duke Divinity School. Graham rolled with it, replying, “I am when I’m not playing with the president of the United States.” But Graham and Kennedy were never close.

Graham’s relationship with Nixon was complex and ultimately painful. When the Watergate scandal broke, Graham said he did not recognize the man he knew as modest and moral. “I did not absolve him — but neither did I judge him,” Graham wrote in his memoirs.

When tapes from Nixon’s White House were released in 2002, Graham was heard telling the president that Jews “don’t know how I really feel about what they’re doing to this country.” He apologized.

William C. Martin of Rice University, one of Graham’s biographers, said in a statement that Graham was stunned when told that some of Nixon’s aides had admitted using the pastor.

“‘I felt like a sheep led to the slaughter,’” Graham responded to Martin, author of “A Prophet with Honor: The Billy Graham Story.”

Graham took a lower political profile after Watergate, but he did not abandon politics. He urged President Gerald Ford to pardon Nixon and supported Jimmy Carter on the SALT disarmament treaty with the Soviet Union.

“A big myth is that he became apolitical after Watergate,” said Michael Long, an associate professor of religious studies and peace and conflict studies at Elizabethtown College in Pennsylvania. “In some ways, he became even more political.”

Graham also was criticized by some conservative evangelicals for praying at the inauguration of Bill Clinton, a supporter of abortion rights — and then criticized again for publicly forgiving Clinton during the Monica Lewinsky scandal and praising Hillary Rodham Clinton for forgiving her husband.

Graham had a close relationship with the Bush family. Patriarch George H.W. Bush said that the pastor’s presence on the eve of the Persian Gulf War helped him avoid doubt, “even for a second … (about) the moral clarity of our mission that January night.”

Years later, his son, George W. Bush, recalled in an interview with Focus on the Family that he’d been drunk the first time he met Graham at the family compound in Kennebunkport, Maine. The two went for a walk that launched Bush’s rejection of alcohol and embrace of Christianity.

“We started talking about religion,” the former president said in the interview. “And Billy sent me a Bible and I started reading the Bible.”

Graham kept a lower profile later in life, but still kept in touch with presidents. He accepted tributes from a trio of them — Carter, Clinton and the elder Bush — at the dedication of the Billy Graham Library in Charlotte, North Carolina. In 2010, President Barack Obama visited Graham at his home in Montreat, North Carolina.

Trump and his wife, Melania, attended Graham’s 95th birthday party in 2013. By the time Trump was inaugurated in January 2017, it was Graham’s son, Franklin, who spoke, declaring the rainy day “a sign of God’s blessing.”