"America's laziest and dumbest judge" dies at 79 - The Horn News 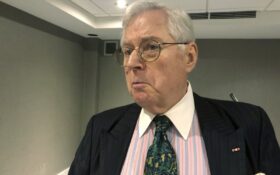 A former West Virginia Supreme Court Justice who once jokingly referred to himself as “America’s laziest and dumbest judge” and who attracted as much attention for his behavior outside the court as in it, has died. He was 79.

“We acknowledge all the great service and his incredible wisdom that he gave to the state of West Virginia,” Gov. Jim Justice said at a news conference Monday.

Neely was first elected to the court at age 31 in 1972. He served until stepping down in 1995 to start a law practice in Charleston. He tried to win back a seat on the court in June but lost to incumbent judge Tim Armstead. Armstead, a former House of Delegates speaker, won a 12-year term.

Neely said he ran because the court system was a mess, especially since a 2018 scandal in which state lawmakers initiated impeachment proceedings that a separate panel of judges later derailed. He also said it was taking far too long for the Supreme Court to process an appeal, which was “very, very bad for litigants.”

During his time as a justice, Neely often got attention both for what he said and did outside of court.

In an ad for a clerk that he placed in the Virginia Law Weekly in 1991, Neely referred to himself as “America’s laziest and dumbest judge.”

The ad sought “a bright person to keep (the judge) from looking stupid,” and gave preference to University of Virginia law students “who studied interesting but useless subjects at snobby schools.”

“If you are dead drunk and miss the interviews, send letters,” the ad said.

When he announced his candidacy last year, Neely defended the ad, calling it a humorous rebuttal to two “highly pompous” federal appeals judges who he said implied in law review articles that clerks “had to be almost superhuman.”

In 1985, Neely fired his secretary for refusing to continue babysitting his son after three consecutive weeks of watching the child. The public outrage that followed prompted him to restore her job and give up the title of chief justice. At the time, Neely claimed he had a right to order his staff to perform such duties as babysitting, collecting his laundry and typing books he wrote.

In 1986, he sued Trans World Airlines for $38,000 after his baggage arrived 70 minutes late at New York’s John F. Kennedy International Airport. He sought $3,000 from the airline as a speaker’s fee because he informed fellow passengers about the delay. He said he settled out of court for $12,500.

At a youth leadership conference in 1989, Neely suggested attacking drug dealers with baseball bats. He told the same conference a year later that society would be better off if women stayed home with their children.

Current Justice Margaret Workman once said of Neely that “someone should drag him kicking and screaming into the 20th century.”

Neely said last year that he stood by the baseball bat statement. He also reiterated his opinion that women should stay home with young children. He said that “would be really nice” because “the more parental time kids have, the better off they are.”