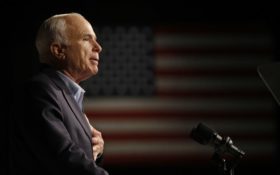 Sen. John McCain, who faced down his captors in a Vietnam prisoner of war camp with jut-jawed defiance and later turned his rebellious streak into a 35-year political career that took him to Congress and the Republican presidential nomination, died Saturday after battling brain cancer for more than a year. He was 81.

McCain, with his irascible grin and fighter-pilot moxie, was elected to the Senate from Arizona six times but twice thwarted in seeking the presidency. He became controversial among Republicans in his later life for his frequent spats with President Donald Trump, but was still respected by the White House.

My deepest sympathies and respect go out to the family of Senator John McCain. Our hearts and prayers are with you!

McCain leaves behind his wife of 38 years, his seven children, and his 106-year-old mother. Nearly a week of services honoring the longtime senator will conclude on Sunday.

An upstart presidential bid in 2000 didn’t last long. Eight years later, he fought back from the brink of defeat to win the GOP nomination, only to be overpowered by Democrat Barack Obama. McCain chose a little-known Alaska governor as his running mate in that race, and turned Sarah Palin into a national political figure.

After losing to Obama, McCain returned to the Senate determined not to be defined by a failed presidential campaign in which his reputation as a maverick had faded. In the politics of the moment and in national political debate over the decades, McCain was energetic.

The scion of a decorated military family, McCain embraced his role as chairman of the Armed Services Committee, pushing for aggressive U.S. military intervention overseas and eager to contribute to “defeating the forces of radical Islam that want to destroy America.”

Asked how he wanted to be remembered, McCain said simply: “That I made a major contribution to the defense of the nation.”

Taking a long look back in his valedictory memoir, “The Restless Wave,” McCain wrote of the world he inhabited: “I hate to leave it. But I don’t have a complaint. Not one. It’s been quite a ride. I’ve known great passions, seen amazing wonders, fought in a war, and helped make a peace. … I made a small place for myself in the story of America and the history of my times.”

Throughout his long tenure in Congress, McCain played his role with trademark verve, at one hearing dismissing a protester by calling out, “Get out of here, you low-life scum.”

But it was just as notable when he held his sharp tongue, in service of a party or political gain.

John Sidney McCain III was born in 1936 in the Panama Canal zone, where his father was stationed in the military.

He followed his father and grandfather, the Navy’s first father-and-son set of four-star admirals, to the Naval Academy, where he enrolled in what he described a “four-year course of insubordination and rebellion.” A predilection for what McCain described as “quick tempers, adventurous spirits, and love for the country’s uniform” was encoded in his family DNA.

On October 1967, McCain was on his 23rd bombing round over North Vietnam when he was shot out of the sky and taken prisoner.

Year upon year of solitary confinement, deprivation, beatings and other acts of torture left McCain so despairing that at one point he weakly attempted suicide. But he also later wrote that his captors had spared him the worst of the abuse inflicted on POWs because his father was a famous admiral. “I knew that my father’s identity was directly related to my survival,” he wrote in one of his books.

When McCain’s Vietnamese captors offered him early release as a propaganda ploy, McCain refused. He insisted that his fellow prisoners, not him, should be the first set free.

In his darkest hour in Vietnam, McCain’s will had been broken and he signed a confession that said, “I am a black criminal and I have performed deeds of an air pirate.”

Even then, though, McCain refused to make an audio recording of his confession and used stilted written language to signal he had signed it under duress. And, to the end of his captivity, he continued to exasperate his captors with his defiance.

Throughout, McCain played to the bleachers, shouting obscenities at guards to bolster the spirits of fellow captives. Appointed by the POWs to act as camp entertainment officer, chaplain and communications chief, McCain imparted comic relief, literary tutorials, news of the day, even religious sustenance.

Bud Day, a former cellmate and Medal of Honor winner, said McCain’s POW experience “took some great iron and turned him into steel.”

McCain returned home from his years as a POW on crutches and never regained full mobility in his arms and leg.

He once said he’d “never known a prisoner of war who felt he could fully explain the experience to anyone who had not shared it.” Still he described the time as formative and “a bit of a turning point in me appreciating the value of serving a cause greater than your self-interest.”

But it did not tame his wild side, and his first marriage, to Carol Shepp, was a casualty of what he called “my greatest moral failing.” The marriage to Shepp, who had been in a crippling car accident while McCain was imprisoned, ended amiably. McCain admitted the breakup was caused by “my own selfishness and immaturity.”

One month after his divorce, McCain in 1981 married Cindy Hensley, the daughter of a wealthy beer distributor in Arizona.

In one day, McCain signed his Navy discharge papers and flew west with his new wife to a new life. By 1982, he’d been elected to the House and four years later to an open Senate seat. He and Cindy had four children, to add to three from his first marriage. Their youngest was adopted from Bangladesh.

McCain cultivated a conservative voting record and a reputation as a tightwad with taxpayer dollars. But just months into his Senate career, he made what he called “the worst mistake” of his life. He participated in two meetings with bank regulators on behalf of Charles Keating, a friend, campaign contributor and savings and loan financier later convicted of securities fraud.

As the industry collapsed, McCain was tagged as one of the Keating Five — senators who, to varying degrees, were accused of trying to get regulators to ease up on Keating. McCain was cited by the Senate Ethics Committee for “poor judgment.”

To have his honor questioned, he said, was in some ways worse than the torture he endured in Vietnam.

In the 1990s, McCain shouldered another wrenching issue, the long effort to account for American soldiers still missing from the war and to normalize relations with Vietnam.

“People don’t remember how ugly the POW-MIA issue was,” former Democratic Sen. Bob Kerrey, a fellow Vietnam veteran, later recalled in crediting McCain for standing up to significant opposition. “I heard people scream in his face, holding him responsible for the deaths of POWs.”

Over three decades in the Senate, McCain became a standard-bearer for reforming campaign donations. He denounced pork-barrel spending for legislators’ pet projects and cultivated a reputation as a deficit hawk and an independent voice. His experience as a POW made him a leading voice against the use of torture. He achieved his biggest legislative successes when making alliances with Democrats.

But faced with a tough GOP challenge for his Senate seat in 2010, McCain disowned chapters in his past and turned to the right on a number of hot-button issues, including gays in the military and climate change. And when the Supreme Court in 2010 overturned the campaign finance restrictions that he’d work so hard to enact, McCain seemed resigned.

After surviving that election, though, McCain took on conservatives in his party over the federal debt and Democrats over foreign policy. McCain never softened on his opposition to the U.S. use of torture, even in the recalibrations of the post-9/11 world. When the Senate in 2014 released a report on the CIA’s harsh interrogation techniques at secret overseas facilities after the 9/11 attacks, McCain said the issue wasn’t “about our enemies. It’s about us. It’s about who we were, who we are and who we aspire to be. It’s about how we represent ourselves to the world.”

During his final years in the Senate, McCain was perhaps the loudest advocate for U.S. military involvement overseas – in Iraq, Syria, Libya and more. That often made him a critic of first Obama and then Trump, and placed him further out of step with the growing isolationism within the GOP.

Few politicians matched McCain’s success as an author. His 1999 release “Faith Of My Fathers” was a million seller that was highly praised and helped launch his run for president in 2000. His most recent bestseller and planned farewell, “The Restless Wave,” came out in May 2018.

McCain’s service to his country began more than six decades ago at the U.S. Naval Academy at Annapolis and will end there in a cemetery overlooking Maryland’s Severn River.

A private burial service next Sunday will conclude nearly a week of events honoring the Navy aviator, prisoner of war, congressman, longtime senator and presidential contender.

Plans taking shape called for McCain to lie in state Wednesday in the Arizona State Capitol on what would have been his 82nd birthday. A funeral will be conducted Thursday at North Phoenix Baptist Church with former Vice President Joe Biden speaking.

In Washington, McCain will lie in state Friday in the Capitol Rotunda with a formal ceremony and time for the public to pay respects. On Saturday, a procession will pass the Vietnam Veterans Memorial and arrive for a funeral at Washington National Cathedral. Former Presidents George W. Bush and Barack Obama are expected to speak at the service.

A private funeral is planned for Sunday afternoon at the Naval Academy Chapel followed by a private burial at the academy cemetery. As he wished, McCain will be buried next to a Naval Academy classmate and lifelong friend, Chuck Larson.