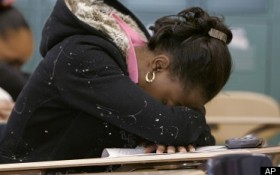 As if today’s kids weren’t already spoiled enough, more and more school districts around the U.S. are pushing back start times for their sleepy teens.

And it’s costing taxpayers millions of dollars in increased costs.

The Seattle school board recently voted to adopt an 8:45 a.m. start time beginning next year for all of its high schools and most of its middle schools, joining 70 districts across the nation who adopted a later start time in recent years on the taxpayer dime.

It’s part of a new movement that claims that if students are better rested, they will perform better academically.

Some have argued that later start times will get in the way of after-school activities like athletics practice. But the largest resistance is based on financial reasons.

The district found that letting teens sleep in was going to add $8 million in taxpayer-funded busing costs, as schedules for elementary and middle-school students would also have to be adjusted and buses added.

“It would be much better to put that in the classroom rather than the gas tank,” said Jackie Statum Allen, the district’s assistant director for strategic planning and policy.