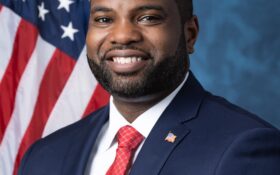 Rep. Byron Donalds, R-Fla., is the newest star of the America First caucus — and he just stunned Congress by twice getting 20 votes for Speaker of the House and thwarting establishment Republican favorite Rep. Kevin McCarthy, R-Calif., in two consecutive votes.

So who exactly is this new political rebel and up-and-coming conservative star?

Donalds, 44, worked in banking after he earned a degree in finance and marketing from Florida State University in 2002. A staunch conservative, he entered the political arena during the Tea Party movement in 2012.

After joining the U.S. Congress as Florida’s 19th congressional districts representative, Donalds was identified by former President Donald Trump and joined his “Freedom Force” — a group of newly elected Republican Party congressmen and women who are “fighting against socialism in America.”

Byron is committed to serving and giving back to the community that gave him so much. He has served Southwest Florida in many ways, including previously serving on the Board of Trustees for Florida Southwestern State College after being appointed by then-Governor Rick Scott. Byron continues to volunteer in his church as a youth leader and a mentor. He also enjoys volunteering as a coach in youth football and basketball leagues.

Congressman Byron Donalds lives in Naples, Florida, with his wife, Erika, and their three sons: Damon, Darin, and Mason. Byron has spent his entire adult life serving others, whether it be through volunteering, business, or leadership. He is committed to representing Florida’s 19th Congressional District’s conservative values in Washington DC to ensure a stronger Florida and a stronger nation.

Rep Byron Donalds told reporters that he has spoken to Kevin McCarthy and plans to again today. He declined to comment when asked if McCarthy should drop out.

Asked him what he wants: He said his chief demand is to allow just 1 member to call for a vote seeking speaker’s ouster pic.twitter.com/kmwl2pgT38