Alt-left mob beats up a liberal... for holding American flag - The Horn News 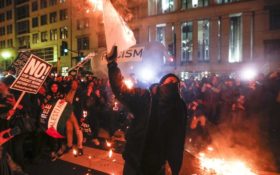 On Aug. 4, a self-described liberal voter and registered Democrat attended a protest in downtown Oregon waving his American flag as he walked through a crowd of alt-left demonstrators.

As he began his stride through the crowd, a group of far-left members turned on him. They demanded he lose the flag, what the mob called a “fascist symbol”… or else.

The victom, a self-described patriotic liberal refused — and he nearly paid for it with his life. For honoring the flag, Paul Welch was struck in the back of the head with a metal-tipped club, which cracked open his skull and left him on the ground in a pool of his own blood.

Ironically, Welch was at the protest in support of the alt-left. He describes himself as a progressive from the area, and said he came to protest against conservatives he called fascists.

“I didn’t come as a part of any one group,” Welch said in an interview with OregonLive. “I was just protesting outsiders coming here for their tacitly fascist event.”

A video of his violent attack has since gone viral. Warning: It is graphic —

“I had felt like showing that a liberal, free Portland — or any major city, really — is much more American and much more numerous and strong than any of these interloping groups,” Welch said.

According to OregonLive, he is a registered Democrat and had voted for Hillary Clinton in the 2016 presidential election.

That’s not good enough in Portland, it seems. The alt-left mob beat Welch just because he was holding an American flag in his hands.

“The right and certainly a lot of smaller groups like Patriot Prayer might rush to things like the flag and try to take it up as, ‘This is our symbol exclusively,'” he said. “Part of my thinking was to take it back,” Welch explained.

It took four staples to close the major gash in Welch’s head. While he was laying on the ground bleeding, his American flag was stolen. No arrests were made.

The mainstream media will never report on this story, of course, because it is does not play into their liberal rhetoric.

But it’s further proof that the violent alt-left does not care what people actually think, or how they vote. They want control, and they will use force and violence against anyone that stands up to them — even liberals.