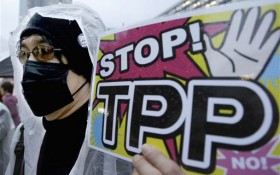 Donald Trump and Hillary Clinton agree on almost nothing. Except for their dislike of a sweeping agreement that would erase most tariffs and other trade barriers among the United States and 11 other nations.

All the bashing from the presidential candidates has created more difficulties for the Trans-Pacific Partnership, one of President Barack Obama’s top priorities in his final year in office.

Some Democratic supporters of the TPP have come around to Senate Majority Leader Mitch McConnell’s position that it’s best to wait until after the November elections to have a vote during a lame-duck session of Congress.

“I don’t think anyone wants to take it up in the lame duck if there aren’t the votes for it, but I don’t see any chance of taking this up earlier than that. That’s for sure,” said Rep. Gerry Connolly, D-Va.

Groups working behind the scenes in support of the agreement said many lawmakers are cautious about staking out a positon on TPP. Another big challenge is the short legislative calendar as lawmakers spend more time at home campaigning and less in Washington.

“Make no mistake the presidential campaign is a huge factor. It presents a stream of challenges that’s difficult for a trade association to deal with,” said John Murphy, a senior vice president at the U.S. Chamber of Commerce.

While the trade pact is supposed to make products cheaper for consumers and help level the playing field for exporters, opponents say it includes giveaways to business lobbies and will cause downward pressure on wages and job losses in some industries.

For the pact’s supporters, there’s a huge incentive to try to get something done this year, knowing the next president will be hard-pressed to touch the issue at first.

Congress approved legislation last year that allows TPP to be approved by a simple majority without opportunities to amend it. The Obama administration believes that coalition remains largely intact.

The real battle will be in the House, where last year’s fast-track legislation passed by a narrow vote of 219-211. The administration is hoping that business and agriculture groups can sustain Republican support and limit any dropouts among the 28 House Democratic lawmakers who supported fast-track trade legislation last year.

Opponents say TPP is in big trouble. The more voters hear about the deal, the less likely they are to support it, said Lori Wallach, an international trade analyst at Public Citizen, a nonprofit public interest group.

“The fact that it’s become a centerpiece in the presidential primary is extremely helpful,” Wallach said.

The Obama administration has been working behind the scenes with lawmakers to try to address concerns about particular facets of the deal. For example, senior officials recently met with Sen. Orrin Hatch, the Republican chairman of the Senate Finance Committee, who has objected to how the deal treats drugs called biologics — medicine derived from living matter such as human cells or bacteria. The United States provides 12 years of regulatory data protection for biologics. Under TPP, a county may limit the data protection to eight years, and possibly lower in some cases, the pharmaceutical industry fears.

While the trade deal has already been negotiated, it’s routine for lawmakers to seek informal commitments from the president to address their concerns, or side agreements between nations that would spell out additional obligations above and beyond the trade pact itself.

Hatch said that if Obama wants TPP to be approved, he will need to work with Congress to address various concerns.

“I’m hopeful that, at the end of the day, I, along with many of my colleagues, will be able to support a strong TPP,” Hatch said. “But this is a once-in-a-life opportunity and we have to make sure we get it right.”

The financial services industry also has some concerns about TPP, as do tobacco growers. Republican Sens. Richard Burr and Thom Tillis of North Carolina both voted for last year’ fast-track legislation, but have announced their intentions to vote against the Trans-Pacific Partnership.

Murphy, who directs the Chamber of Commerce advocacy efforts on trade, said he still sees “a lot of good will” to advance the trade pact, but he says he won’t make any predictions on timing.

“All our potential supporters on the Hill agree the substance has to drive the timing,” Murphy said.