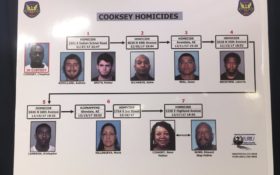 A serial killing suspect shot and killed nine people, including his own mother, and used a victim’s gun in some of the slayings that unfolded in a three-week span late last year, authorities said Thursday.

Shell casings, DNA, stolen jewelry and a cellphone taken from a victim were among the pieces of evidence that investigators used to tie Cleophus Cooksey Jr., 35, to the killings, according to court documents.

“It should appall every one of us in the room that he managed to kill nine people period, let alone in such a short period of three weeks,” said Sgt. Jonathan Howard, a Phoenix police spokesman.

The seven men and two women were shot between Nov. 27 and Dec. 17 in their homes, suburban apartment complexes, in a parked car or while outside, the documents state.

Cooksey, described by police as an aspiring musician, knew some of the victims but investigators were still trying to determine motives in a few of the attacks, according to police officials in Phoenix, Glendale and Avondale.

“We have witnesses that are identifying relationships between the suspect and his victims but we have yet to discover what kind of started this entire spree,” Howard said.

A number of details were withheld by police who cited the ongoing investigation.

Authorities were not discounting the possibility that Cooksey could be linked to other crimes. Howard encouraged anyone who has information about his relationships or activities to call police.

The victims included Jesus Real, 25, the brother of Cooksey’s ex-girlfriend. Real was asleep in his Avondale home on Dec. 11 when he was shot twice in the face. Avondale police say Real’s sister and Cooksey had broken up the night before.

Another victim, 43-year-old Maria Villanueva, was seen on surveillance video arriving at a Glendale apartment complex on Dec. 15 and then leaving with an unknown man in the driver’s seat.

Her partially nude body was found the next morning in a Phoenix alley and her car was found abandoned at another complex in Glendale.

Investigators found a cellphone and a bloody men’s shirt inside. DNA on the shirt matched Cooksey’s, court documents said. The cellphone was also confirmed to be his.

Cooksey was arrested Dec. 17 for the shooting deaths of his mother and stepfather in their home and has been jailed since then on two counts of first-degree murder and one count of being a felon in possession of a weapon.

Cooksey was rebooked into jail Thursday in the seven additional homicide cases, Howard said. He was being held on a $5 million bond, according to a court document.

Cooksey previously served 16 years in prison for manslaughter and armed robbery and had been free for 18 months, authorities said.

It’s the second time in the past few years that Phoenix has dealt with serial killings. Aaron Juan Saucedo has been charged with first-degree murder and other crimes in drive-by shootings in 2015 and 2016 that left nine people dead and two others wounded.

Saucedo has pleaded not guilty to the charges. Prosecutors have said they intend to seek the death penalty.