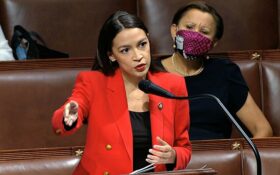 Rep. Alexandria Ocasio-Cortez, D-N.Y., kept relatively quiet in the lead up to the 2020 election.

The social media-savvy congresswoman won her re-election in her far-left New York district by more than 50,000 votes.

And although she’s won another two years in Washington, D.C., she’s not sure she’ll accept.

Could it be coming to an end?

Ocasio-Cortez told the New York Times that she has regularly considered resigning from her position.

Given her overwhelming re-election, Ocasio-Cortez’ rise to the House floor may not have been a fluke — but her dreams of a socialist takeover is falling laughably flat.

And she found out the hard way that many centered Democrats despise her radical liberal policies. The way moderate liberals see it, their election losses were a reflection of unpopular proposals put forth by the likes of AOC.

Rep. Jim Clyburn, D-S.C., otherwise known as the man who saved Joe Biden’s campaign early in 2020, said calls to “defund the police” hurt many of the Democratic campaigns across Congress.

“These headlines can kill a political effort,” he told CNN. “I really believe that that’s what cost Joe Cunningham his seat,” he went on, referencing the race for South Carolina’s 1st district seat won by Rep. Nancy Mace, a Republican.

When protests and unrest swept throughout cities all across America, public support for actually defunding the police was still dismal. Just 31 percent supported the far-left idea.

Many GOP election campaigns took advantage of radical Democrats like AOC who wanted to abolish the police entirely, using the radical soundbites and attached them to Democratic candidates on political ads.

Clyburn believes this is where liberal lawmakers messed up… particularly in the case of Sen. Lindsey Graham, R-S.C., rival Jaime Harrison, who was crushed by more than 10 percentage points.

“Jaime Harrison started to plateau when ‘defund the police’ showed up with a caption on TV, ran across his head.” Clyburn said. “That stuff hurt Jaime.”

Likewise, it seems that Ocasio-Cortez has her feelings hurt.

And she’s considering taking her ball and going home.