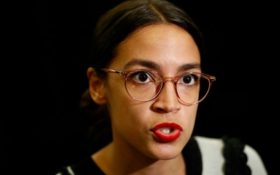 She can’t keep herself away from the cameras, even as her extreme, socialist proposals threaten to ruin the Democratic Party.

Now, at least one fellow Democrat, an Army war hero, has had enough.

Sponsored: Do you know the most important indicator of a healthy heart?

He’s admitting that Ocasio-Cortez’s ridiculous ideas are little more than fantasies and “lies.”

And he’s practically daring her to challenge him.

Freshman New York Congressman Max Rose, who received a Purple Heart and Bronze Star for his service in Afghanistan, recently sat down for an interview with MetroFocus.

And he didn’t hold back when discussing Ocasio-Cortez’s disastrous Green New Deal proposal, which failed to gain a single vote in the Senate.

Rose called the proposal a “massive socialist economic policy” that was “just not needed.”

And some of the Green New Deal’s other elements, such as guaranteed jobs and housing, are just lies meant to pander to voters.

“There’s no need to lie to voters,” Rose said.

And what about Ocasio-Cortez’s threats to keep “a list” of people who oppose her, and work to get them out of office?

Rose says bring it on.

“This is very simple because I’m not one to deal in subtleties,” he said. “I think it’s best not to be passive-aggressive. If she wants to primary me, if the Justice Democrats want to primary me, I’ll lay out the red carpet. We can settle this at the polls.”

To watch a clip of Rose’s interview, click below.