[Alert] After Puerto Rico, here’s where Hurricane Maria is heading next - The Horn News 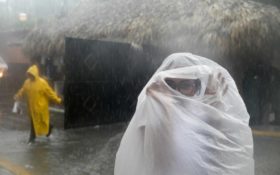 After devastating Puerto Rico, Hurricane Maria is heading straight for the Dominican Republic — and experts warn that it’s possible (though unlikely) the storm diverts towards the U.S. mainland after.

An update from the Miami-based center says maximum sustained winds have increased to near 115 mph with higher gusts.

Maria’s fierce core was centered about 55 miles northeast of Punta Cana, Dominican Republic. It will continue to move away from Puerto Rico during the next several hours, and then pass offshore of the northeastern coast of the Dominican Republic early Thursday. Maria should then move near the Turks and Caicos Islands and the southeastern Bahamas tonight and Friday.

While satellite images appear to show Maria’s projected path will stay at sea and not directly hit the east coast, experts say nothing is certain.

“Most likely it will bring a chance of rain to the Mid-Atlantic up through Massachusetts depending on how close it gets to the coast,” said CNN meteorologist Michael Guy.

“Once we have a definitive forecast on where Maria will go after the next five days — then we can be sure if we are in the clear.”

Tens of thousands of Puerto Ricans were stunned by a hurricane that knocked out power for the whole island and paralyzed the U.S. territory with landslides, flooding and downed trees. They have vowed to slowly rebuild amid an economic crisis as rescue crews fanned out Thursday.

The extent of the damage is unknown given that dozens of municipalities remained isolated and without communication after Maria hit the island Wednesday morning as a Category 4 storm with 155 mph winds, the strongest hurricane to hit Puerto Rico in over 80 years.

Uprooted trees and widespread flooding blocked many highways and streets across the island, creating a maze that forced drivers to go against traffic and past police cars that used loudspeakers to warn people they must respect a 6 p.m. to 6 a.m. curfew imposed by the governor to ensure everyone’s safety.

“This is going to be a historic event for Puerto Rico,” said Abner Gomez, the island’s emergency management director.

Previously a Category 5 with 175 mph winds, Maria hit Puerto Rico as the third-strongest storm to make landfall in the U.S., based on its central pressure. It was even stronger than Hurricane Irma that storm roared into the Florida Keys earlier this month.