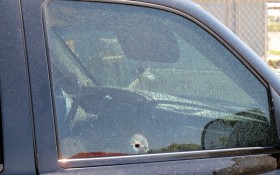 There’s a good possibility that a highway sniper has emerged in Arizona and is targeting random civilians while they drive their cars.  According to ABC News, “drivers along a highway in Phoenix have endured nine possible shootings in the last 10 days in a potential act of domestic terrorism.”

The Associated Press is reporting that all of the shootings occurred within an 8-mile stretch of the Interstate 10 freeway, which runs through central Phoenix.

The shootings started in late August.

“You should be concerned. We have some people or person shooting at moving vehicles on I-10,” Arizona Department of Public Safety Director Frank Milstead said at a news conference. “It has not ended in tragedy, but it could.”

Authorities are asking for information from anybody who saw anything unusual on the freeway around the times when the shots were fired.

“Somebody knows something,” Milstead said Monday. “We’re not sure if these shootings are random or related. We don’t know what the intent is. It’s not known at this point if it’s a copycat crime.”

A tour bus and an SUV were two of the vehicles fired upon, but DPS is withholding other specifics so the investigation won’t be jeopardized.

The bullets have hit windshields and headlights, and others have struck the passenger sides of the vehicles, Milstead said.