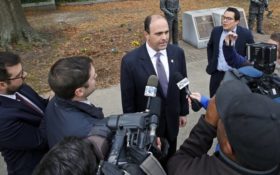 It’s time to pick the winner in a bitterly contested election that could decide the balance of power in the Virginia House of Delegates, Republican leaders said Friday — and the courts must not let the Democrats steal the seat.

Lawyers for Republican Del. David Yancey urged state elections officials to schedule a random drawing of the winner’s name no later than Jan. 9, the day before the legislature reconvenes, and not let the Democrats claim the seat they haven’t won.

In court documents, Yancey’s lawyers argued that a three-judge recount court has already reviewed a single disputed ballot and found it was cast for Yancey, declaring the Nov. 7 election a tie.

“The Court’s ruling is final and not subject to appeal,” Yancey’s attorneys wrote. “Any further delay simply deprives the people of its representative in the House of Delegates.”

Republican leaders also suggested in a conference call with reporters that Democrats are deliberately trying to make it difficult for the House to get down to business when the legislature reconvenes.

“Democrats have sought to delay and obstruct at every turn,” said GOP House Leader Kirk Cox.

“They’ve sought to litigate their way to victory.”

The intense battle over the 94th District is another dramatic twist in a November election that saw Democrats wipe out a 66-34 advantage held by Republicans in the House.

If Simonds ultimately wins the 94th District, the House will be split 50-50 between Republicans and Democrats. If Yancey wins, Republicans will have a 51-49 edge.

The state Board of Elections had been scheduled to pick the winner’s name out of a glass bowl on Wednesday, but postponed the drawing after Simonds filed her legal challenge.

Board Chairman James Alcorn said Friday that the three-judge election court has given no indication as to whether it will reconsider its ruling declaring the race a tie. Alcorn said the board plans to reschedule the drawing next week, “unless the court intervenes.”

It initially appeared that Yancey had won the race by 10 votes. But Simonds won a recount by a single vote. The next day, the recount court declared a tie based on a disputed ballot the court determined was a vote for Yancey.

The result is one of two House races still in limbo.

A lawsuit is pending over ballots in a hotly contested race in the 28th District in the Fredericksburg area.