[Alert] 300 ISIS recruiters are in America - The Horn News 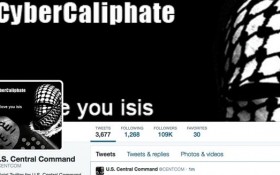 Gen. Joseph Dunford, chairman of the Joint Chiefs of Staff, stood before the House Armed Services Committee yesterday and admitted that the Obama administration has “not contained [ISIS].”

And that just may turn out to be the understatement of the year.

According to a new report from the George Washington University Program on Extremism, ISIS is not just unconstrained. The terror group actually has hundreds of members and sympathizers actively operating and recruiting in America.

The program says it has identified at least 300 active, American-based ISIS social media accounts that are patrolling the Internet.

Their goal is, in part, to recruit home-grown terrorists every day, and help these recruits kill and terrorize Americans.

“ISIS-related mobilization in the United States has been unprecedented,” the report states. In addition to the 300-plus ISIS accounts on social media, as of this fall approximately 250 Americans have traveled or attempted to travel to Syria or Iraq to join ISIS.

But with social media, ISIS’ American operatives can make contact with people in every part of the country even with just a few hundred accounts.

“Social media plays a crucial role in the radicalization and, at times, mobilization of U.S.-based ISIS sympathizers,” according to the report. “The Program on Extremism has identified some 300 American and/or U.S.-based ISIS sympathizers active on social media, spreading propaganda, and interacting with like-minded individuals. Some members of this online echo chamber eventually make the leap from keyboard warriors to actual militancy.”

Since March 2014, 71 Americans have been charged with ISIS-related activities. Of those, 56 have been arrested in 2015 alone. That’s a record number of terrorism-related arrests for any year since 9/11.
Those arrested fit a wide profile. The average age of those caught is 26, and 86 percent are male. Just over half traveled or attempted to travel abroad, and over a quarter were seeking to commit acts of terror on American soil.
The full report can be read here.
View older comments