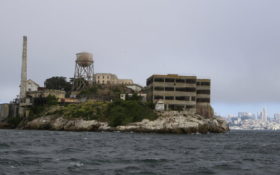 One of the 20th centuries greatest mysteries has been brought back into question what happened to the three inmates that escaped from Alcatraz in 1962?

In 1962, brothers John and Clarence Anglin and Frank Morris vanished from the island prison without a trace. Monday, a new revelation was found that gives greater insight into the mystery.

A letter was obtained that John Anglin allegedly wrote admitting the escape… and pleading for help.

The running theory for decades has been that the three man died shortly after stepping foot into the frigid cold Pacific waters that separated the infamous prison and San Francisco.

The bodies of the men were never found and the story has remained a mystery — until CBS San Francisco reported  that they obtained a letter from John dated back to 2013.

“My name is John Anglin,” the letter reads. “I escape (sic) from Alcatraz in June 1962 with my brother Clarence and Frank Morris. I’m 83 years old and in bad shape. I have cancer. Yes we all made it that night but barely.”

The letter continued, “If you announce on TV that I will be promised to first go to jail for no more than a year and get medical attention, I will write back to let you know exactly where I am. This is no joke.”

The letter was sent by an unnamed source to the San Francisco Police Department’s Richmond precinct.

Before their disappearance, the three prisoners were serving sentences for a bank robbery. The worst type of criminals were sent to Alcatraz and for 29 years it was the most secure federal prison in the country.

“As a law enforcement person I’d like to think that their escape attempt was not fruitful for them. Personally, as someone who swims in the bay, and we have a triathlon that goes on every year, and there’s not a single person that doesn’t make that swim,” he added.

According to the letter, Frank passed away in 2008 and John’s brother died three years after.

The FBI says this is the most recent piece of evidence they have obtained and it has forced them to reopen the cold case.

The U.S. Marshals is the sole agency investigating the case today. They explained that the FBI lab examined the letter for fingerprints, but the results were inconclusive.

“So that means yes, and it means no, so this leaves everything in limbo,” said Harp.

The writer of the letter stated that he spent many years after his escape living in Seattle, then North Dakota and Southern California.

“There is absolutely no reason to believe that any of them would have changed their lifestyle and became completely law abiding citizens after this escape,” The U.S. Marshals Service wrote in a statement to CBS San Francisco.

“The Federal Bureau of Prisons say that they drowned once they got off of Alcatraz and their bodies were swept out to the Pacific Ocean — end of story,” said National Park Service Ranger John Cantwell.

If the inmates were alive today, Frank Morris would be 90 years old and John and Clarence Anglin would be 86 and 87.