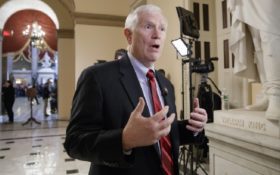 Alabama Sen. Luther Strange on Tuesday looked to support from President Donald Trump to help carry him to the victory – or at least a runoff – in the Alabama Senate Republican primary, while his GOP rivals continued to batter him as the candidate of the so-called Washington establishment.

Alabama voters go to the polls Tuesday to select party nominees in the closely watched Senate race for the seat that belonged to Attorney General Jeff Sessions. The race will test both the reach of Trump and Senate Majority Leader Mitch McConnell after a super political action committee tied to McConnell spent millions of dollars in advertising to try to clear the way for Strange.

Trump weighed in with a Monday night recording urging Alabama Republicans to support Strange as the GOP incumbent was forced into what could be a tight race with a slate of firebrand challengers including former Alabama Chief Justice Roy Moore, who has a strong following among evangelical voters, and U.S. Rep. Mo Brooks, a member of the conservative House Freedom Caucus.

“The final pitch is: Listen to President Trump. The key is someone who will support him in Washington. He’s endorsed me, and secondly to please get out and vote because turnout will be so critical in this election tomorrow,” Strange said Monday in between phone calls at his campaign headquarters.

Strange said he believes the “momentum is on our side with the President’s tweet and robocalls,” but cautioned that the off-year special election has an air of unpredictability.

Brooks on Monday continued to hammer at Strange’s support from McConnell and said voters should send a message that “our Alabama Senate seat cannot be bought by special interests in Washington D.C.”

“Alabama has a chance to send a message, a huge message – not only to Washington D.C. – but the United States of America. We can send a message that we are tired of this do-nothing Senate,” Brooks said.

Brooks said it is he, and not Strange, that is more supportive of Trump’s agenda, including changing Senate filibuster rules.

Brooks told The Associated Press by telephone Monday that it would send “chills down the spine” of McConnell for the race to end up in a runoff between himself and Moore.

Moore is considered a strong contender in the race because of the fame he has gained as an icon of the culture wars. Moore was twice removed from his duties as chief justice over stances he took for the public display of the Ten Commandments and against gay marriage.

“This is a very, very critical election. It’s a critical time in our country. Whether we move forward or we stay stagnant and do nothing, whether we put the hand to the plow and do something for our country to make it a better place,” Moore said.

The crowded GOP field increases the odds that the race will end up in a September runoff between Tuesday’s top two finishers. A runoff is required unless a candidate captures over 50 percent of the vote in the first round of balloting. Other Republicans in the race include Sen. Trip Pittman and Christian Coalition leader Randy Brinson.

The rollicking primary began with Strange’s appointment in February by then-Gov. Robert Bentley, who later resigned in the cloud of a scandal. While Strange has said he did Bentley no favors, his challengers have taken repeated swipes at him for seeking an appointment from the governor when Strange, as attorney general, was in charge of an investigation.

The Democratic side is also crowded, but has escaped most of the drama of the bitter GOP race. Doug Jones, a former U.S. attorney under the Clinton administration, is perhaps the best-known Democrat and is backed by some national party figures such as former Vice President Joe Biden.

Other candidates include Michael Hansen, the head of an environmental organization who has urged Democrats to fully embrace progressive stances. Robert Kennedy, Jr., a Navy veteran who is unrelated to the famed Massachusetts political dynasty, has urged Democrats to build bridges with Republicans and independents.

While Alabama has not elected a Democrat to the U.S. Senate in more than 20 years, some Democrats hope a December special election – particularly if Republicans end up with a polarizing nominee – could give them at least a chance in the matchup between the winning Republican and Democrat.

“I think the Washington crowd is watching this race because it’s kind of a bellwether,” Moore said.