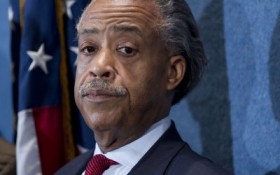 Reverend Al Sharpton was humiliated on camera on Sunday — and critics are not letting him live it down.

In what was supposed to be a tribute to legendary singer Aretha Franklin, Sharpton botched the spelling of her famous song “Respect” during his show on MSNBC.

Sharpton hosts “PoliticsNation” on MSNBC on Sundays, and this week he chose to attack President Donald Trump for calling his former staff Omarosa Manigault Newman a “dog” after she released a claim that attacked his administration.

Sharpton claimed, “I think you might’ve learned the lesson this week, sometimes the dog bites back with a book deal.”

He added, “In the words of my late friend, Aretha Franklin, show some R-E-S-P-I-C-T.”

Sadly enough, the man who cannot even spell “Respect” correctly was given a show on MSNBC… that tells you a lot about their network!

In all fairness, his employment at MSNBC did increase the average intelligence of their people.

Sharpton has never been a quiet critic of Trump, but this time, critics are suggesting he was better off keeping his mouth shut.

If he cannot even spell respect correctly, it’s tough for Sharpton to earn it.