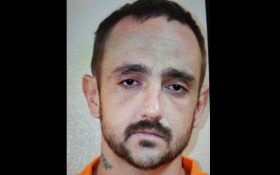 A Mississippi man arrested after five people were found dead in a rural Alabama home blamed the gruesome rampage on drugs, telling reporters Monday there weren’t words to express his regret for what had happened.

Wearing shackles and escorted by law enforcement officers as he arrived in Mobile, Alabama, from Mississippi, where he surrendered to authorities, Derrick Dearman said he was on methamphetamine when he went to the house the night of the killing.

Dearman, 27, said he turned himself in after sobering up.

“I came down and realized what was really going on,” said Dearman, who didn’t describe exactly what happened inside the home but apologized for his actions.

Earlier, a Mississippi sheriff said Dearman had admitted killing at least one of the five adults slain at a rural home where his estranged girlfriend had sought shelter amid allegations of abuse.

Hours after the slayings, Dearman walked into the sheriff’s office in Leakesville, Mississippi, “stating that he had killed someone or more than one person in Citronelle, Alabama,” Greene County Sheriff Stanley McLeod said in a statement.

The slayings, which happened at the end of a dirt road outside Citronelle, left three men and two women dead. The victims included a pregnant woman and her unborn child.

Authorities said Dearman abducted estranged girlfriend Laneta Lester and a child from the house after the slayings, but both were later released unharmed. The home belonged to Lester’s brother, who was among the victims and had let his sister stay there because she was afraid of Dearman, friends and relatives of the victims said.

Dearman, in comments recorded on video, apologized to Lester by name and described the victims as his friends.

A teenager who said she was related to all five victims by marriage or blood shook her head and fought back tears as she described her anguish over the slayings.

“They were really good people. They’d call and check on you, ask if you want to come down and eat,” said Madison McDaniel, 17, who lives near the scene of the horrific violence.

Relatives of the victims started an online fundraiser to help cover funeral expenses, and clerk Dawn Sullivan collected donations in a plastic jug on the counter at D&B Quick Stop, where the victims often stopped for snacks and drinks.

“It’s a sad situation. It never should have gotten to that point,” said Sullivan, whose husband was related to one of the victims.

Dearman, of Leakesville, will be charged with six counts of capital murder, including one charge for the unborn child, Mobile County sheriff’s spokeswoman Lori Myles said.

Alabama court records don’t indicate whether Dearman has an attorney who could speak on his behalf.

Turner was Lester’s brother and had let her stay at the house, which all the victims shared, McDaniel and Sullivan said. Turner and Randall were married.

About 1 a.m. Saturday, someone inside the home called 911 and reported that Dearman was on the property, authorities said in a statement. Citronelle police came to the house, but Dearman had left before officers arrived, sheriff’s officials said.

Before daylight Saturday, Dearman returned to the home and attacked the victims while they were sleeping, the sheriff’s department said. Mobile County District Attorney Ashley Rich said “multiple weapons” were used.

After the killings, Dearman forced Lester and a 3-month-old identified by relatives as the child of Randall and Turner into a vehicle, and they drove to Dearman’s father’s house in Mississippi. Dearman released Lester and the infant and turned himself in, authorities said.

Dearman’s ex-wife, Crystal Dearman, told WALA-TV the man “always had a temper, especially when he doesn’t get his way.”

“I woke up to him holding a knife to my throat in bed with my baby in the crib,” said Dearman, who said the two divorced in 2010. “He’s made threats the entire time we were together and after we separated.”