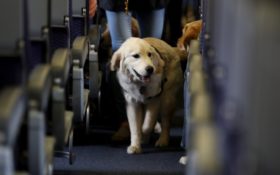 Delta Air Lines will soon require owners of service and support animals to provide more information before their animal can fly in the passenger cabin, including an assurance that it’s trained to behave itself.

The airline says complaints about animals biting or soiling plane cabins have nearly doubled since 2016.

Starting March 1, Delta will require owners to show proof of their animal’s health or vaccinations at least 48 hours before a flight.

Owners of psychiatric service animals and so-called emotional-support animals will need to sign a statement vouching that their animal can behave. But owners will be on the honor system — they won’t have to show, for example, that their dog graduated from obedience school.

The new requirements don’t apply to pets that stay in under-seat kennels during flights.

Delta’s policy change arrives with the number of animals in the cabin increasing.

John Laughter, the airline’s senior vice president of safety and security, said there are insufficient rules in place to screen animals for health and behavior issues. He said Delta sought a balance “that supports those customers with a legitimate need for these animals” while maintaining safety.

Delta’s new rules are aimed at two categories: service animals, which receive specific training to help blind or disabled passengers; and so-called emotional-support animals, which require no training at all. Both fly for free and are not required to be caged during the flight.

The emotional-support group has been growing rapidly, and it is the target of most of the new Delta procedures. Last June, a 70-pound dog flying as a support animal bit another passenger several times in the face on a Delta plane in Atlanta. The victim was hospitalized.

Federal regulators have interpreted a 1986 access-to-travel law to allow support animals in airplane cabins and in apartment buildings that do not allow pets. That has created a cottage industry of online companies that help people establish their pet as an emotional support animal. The classification spares the owner hefty airline charges.

Airlines must allow support animals in the cabin, although they can require owners to present a letter from a doctor or other medical provider who can vouch that the human traveler is helped by having the animal there. Delta will now ask to see those letters 48 hours in advance.

Delta, the second-biggest U.S. airline by revenue, said it transports about 700 service and support animals every day, nearly 250,000 per year. More than two-thirds are emotional-support animals. That does not include animals for which owners pay a fee to keep in a carrier under their seat during flights.

Although exact figures aren’t available, airline employees say dogs and cats are the most common animals on planes, but there have been sightings of pigs, snakes and turkeys too.