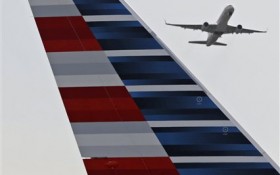 U.S. airlines have ramped up an aggressive lobbying campaign that seeks nothing less than converting the government from an industry regulator to a business ally.

The big three legacy carriers — Delta, American and United — want the Obama administration to protect them from competition from foreign airlines, arguing those rivals can undercut ticket prices thanks to government subsidies or cheaper labor.

At the same time, the U.S. airlines want Congress to roll back or forestall rules aimed at protecting consumers. One is a requirement that airlines show ticket buyers the full cost of fares, including taxes and fees, instead of burying the information in fine print.

The lobbying already has been effective.

At the urging of the big three and the Air Line Pilots Association, 262 House members and 22 senators wrote the administration asking for a freeze in the number of flights to the U.S. now allowed for three Persian Gulf airlines — Emirates, Etihad and Qatar — and discussions with the United Arab Emirates and Qatar about whether those airlines are violating aviation treaties with the U.S.

Such “open skies” agreements, a hallmark of U.S. policy for two decades, permit U.S. airlines broad access to aviation markets in more than 100 countries in exchange for similar access to the U.S. for those countries’ airlines.

The U.S airlines and their unions say the Gulf carriers have received $40 billion in subsidies from their governments since 2004, in violation of the treaties, and those subsidies have allowed them to charge lower fares and gain market share.

Consumer advocates say the U.S. carriers have carved up about 80 percent of the lucrative trans-Atlantic market through joint ventures and alliances with overseas airlines, and now are trying to ward off competitors offering a cheaper alternative.

In January, the top executives of American, Delta and United pressed their case in private meetings with the secretaries of Transportation and Commerce, as well as White House and State Department officials. The heads of American and Delta followed up with a meeting with Secretary of State John Kerry on Sept. 17.

The big three and their pilot unions have also blocked an application by Norwegian Air International, a subsidiary of Norwegian Air Shuttle, the third largest low-cost carrier in Europe, to fly to the U.S. from Europe and Asia. They say the subsidiary’s business model would drive down wages and undermine safety; Norwegian denies that. The Ireland-based subsidiary plans to hire pilots through a Singapore broker and base them in Thailand.

On another front, Delta Air Lines, which carried more passengers last year than any airline in the world, has been campaigning to block the U.S. Export-Import Bank from helping foreign competitors such as Air India and the Gulf carriers finance the purchase of planes from Boeing. Delta says the planes are used to compete on routes Delta also flies. Boeing is the nation’s largest exporter in dollar terms.

Tea party conservatives in the House have branded the bank an example of “corporate welfare” and have prevented Congress from renewing the bank’s lending authority, which lapsed on July 1.

It’s part of a struggle by airlines to maintain control of international markets for their joint ventures and alliances “in the fastest-growing regions of the world” such as the Middle East and southern Asia, said Charlie Leocha, president of the consumer group Travelers United.

Delta says it isn’t trying to gain “government protection from competition, but to ensure our national policies foster fair competition.”

U.S. airlines are not united on these issues. Delta is alone in its opposition to the bank. JetBlue and others oppose the big three’s position on the Gulf carriers. JetBlue transports passengers arriving in the U.S. on those carriers to other cities.

What does unite the airlines and their trade association, Airlines for America, is opposition to consumer protection rules issued or proposed by the Transportation Department. Several airlines took their case to the Supreme Court to block a regulation that requires airlines to display ticket prices that include taxes and fees. After they lost, they persuaded the House to twice pass a bill to roll back the rule.

The Senate has shown no interest in taking up the legislation, but Nick Calio, president of the trade association, said the issue is not dead and the airline industry will prevail, eventually.

“Some of the members of Congress are fond of telling me, ‘You can’t get everything you want’,” he said in an interview. “I just don’t take that attitude. We can, and we know that, so we’re making progress.”

Airlines also oppose a proposed requirement that ticket sellers inform consumers of the cost of a first and second checked bag, an advance seat assignment and a carry-on bag on the first computer search screen where airfares are displayed, rather than waiting until a buyer has selected a fare and is checking out. That way, the department reasons, consumers will know the full cost of the trip from the beginning and won’t be surprised later by fees, which can vary widely.

In general, airlines say it’s in their interest to keep their passengers happy, so these sorts of consumer protections are unnecessary.

The state of government regulation of airlines is “dismal,” Calio, the top White House lobbyist under Presidents George H. W. Bush and George W. Bush, said in a speech to the International Aviation Club last year. “We are still operating in an environment where the DOT thinks it needs to protect customers from airlines,” referring to the federal Transportation Department.

Airlines also are fighting airports over whether to raise from $4.50 to $8.50 the “passenger facility charge” included in tickets. The fee hasn’t increased in 15 years. It generates money primarily used for additional airport runways and gates.

Airlines say the $4-increase per flight segment would reduce ticket sales. Airports and industry observers say the issue is really about controlling access to airports. Airports want to use the money to enlarge terminals and add gates in order to attract more airlines. But airlines already there have an interest in keeping out competitors. Because of mergers, one or two carriers control a majority of the market at most airports.

The airlines are the political muscle behind a movement in Congress to take responsibility for air traffic control away from government and give it to a nonprofit corporation. The hope is that shift would avoid congressional budget fights hampering modernization of the air traffic system. Private aircraft owners, however, worry the change would shift costs to them and force them from busy airports to make more room for airlines.

At the same time, airlines are under pressure from the Obama administration. The Justice Department is investigating whether Delta, United, American and Southwest have colluded to limit available seats and keep fares high. United’s chairman and CEO, Jeff Smisek, stepped down on Sept. 8 amid an investigation into the airline’s dealings with the agency that operates New York-area airports. The Transportation Department is investigating whether airlines engaged in price gouging in the Northeast after a deadly Amtrak crash in Philadelphia in May left passengers scrambling for travel alternatives.

To bolster their influence, airlines — Delta in particular — have hired from their former overseers.

Robert Rivkin, a former general counsel at the Transportation Department who oversaw consumer regulations, is Delta’s senior vice president and deputy general counsel. Bob Letteney, who was the department’s assistant secretary for aviation and international affairs, is a Delta managing director. Will Kinzel, another Delta managing director, was a policy adviser to House Speaker John Boehner, R-Ohio.

The revolving door spins both ways.

Chris Brown was a vice president at Airlines for America before he was hired this year as staff director for the House Transportation and Infrastructure subcommittee on aviation. The full committee’s chairman, Rep. Bill Shuster, R-Pa., has acknowledged a “private and personal relationship” with Shelley Rubino, a vice president of the trade group who lobbies his committee. Shuster’s personal office chief of staff, Eric Burgeson, is married to Christine Burgeson, a senior vice president at the trade association. A former US Airways lobbyist, Tom Chapman, is the Democratic counsel for the Senate Commerce Science and Transportation subcommittee on aviation. Former Sen. Bryon Dorgan, D-N.D., chairman of that subcommittee until he retired in 2011, has been hired by American to lobby for transferring air traffic control to a nonprofit corporation.

The airline industry and its employees donated nearly $3.6 million to congressional candidates for the 2014 elections. The industry spent nearly $26.5 million on lobbying last year, according to the political money website OpenSecrets.org. Three days after Boehner announced he was resigning from Congress, airline CEOs and lobbyists flocked to a fundraiser for Majority Leader Kevin McCarthy, R-Calif., who at the time was seen as Boehner’s most likely successor.

Four years ago, Airlines for America and its members proposed that Congress and the administration create a “national airlines policy” that would bolster the industry’s economic well-being by decreasing taxes, reducing regulation and modernizing the air traffic control system. At the time, many airlines were operating on the thinnest of profit margins. But lately airline profitability has rebounded thanks to mergers, lower fuel prices and an improved economy.

The lobbying fight for that goal is more intense than ever. To Calio, there are “some champions on Capitol Hill who are willing to stand up for the industry.” But more work needs to be done, he said, to counter the perception that now that the industry is profitable, “that is somehow a bad thing.”