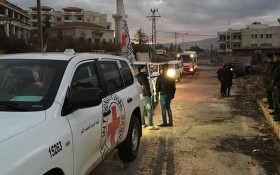 Tears of joy met the United Nations aid convoy, which arrived at the besieged Syrian towns of Madaya, Foah and Kefraya on Monday after receiving credible reports of people dying of starvation at the hands of the Iranian-backed Hezbollah forces. The aid is reported to supply citizens with enough food to last 40,000 people for a month. The UN Office for the Co-ordination of Humanitarian Affairs (OCHA) posted this photo to Twitter as the convoy was “about to enter” Madaya.

Madaya, northwest of the capital Damascus, has been under siege by regime and Hezbollah troops since July, leaving up to 30,000 remaining citizens without food or medical aid. At least 23 people have died of starvation and eight of sniper killings or injuries, according to local doctors. Residents have been forced to boil leaves, eat dirt, and hunt for stray dogs and cats out of desperation for food to survive.

Resident Amjad Almaleh told CNN that food is available but unaffordable. Due to the limited supply, he claims a kilo of sugar costs about $200, a kilo of flour or rice is $120, and a liter of milk is $300.

A report by the humanitarian organization Syrian American Medical Society (SAMS) claims the Iranian-backed Hezbollah dug landmines around the town between checkpoints where snipers stand guard, making it impossible for any Syrians living in Madaya to leave or any humanitarian aid to enter.

Over the past year, the UN said only 10 percent of its requested aid deliveries to hard-to-reach and besieged areas of Syria were actually approved and carried out.

The last aid received was in October, when the UN delivered aid to Madaya, but 350 out of the 650 boxes in the delivery consisted of expired and inedible biscuits.

Graphic images have surfaced on social media of malnourished men, women and children in an effort to encourage aid efforts and spread awareness of the dire conditions.

A 32-year-old activist in Madaya told Buzzfeed, “We have forgotten the word hope. We don’t believe in hope because of the false promises of the regime and the United Nations. They’ve given us empty promises for four months to send us food but we have not seen anything yet.”

In a video posted by Dr. Khaled Mohammed, a SAMS-affiliated physician, a seven-year-old malnourished boy says he hasn’t eaten in seven days and when asked what he would like to eat the most replies, “anything is good.”

Another video posted by Dr. Mohammed shows a seven-month-old malnourished infant crying and her mother saying she hasn’t had milk in more than a month.

Because of ongoing violence, nearly 400,000 people in 15 besieged locations across Syria do not have access to food and aid.

With temperatures progressively decreasing, SAMS is reporting that thousands of people are now at an increased risk of hypothermia. Citizens have begun burning what is left of abandoned houses for warmth.

Upon the announcement last Thursday of aid to come to Madaya, citizen journalist Maaz al-Qalamuni told AFP that citizens were cautiously optimistic, due to failed promises in the past. When the first shipment finally reached Madaya Monday, starving residents were brought to tears at the sight, a United Nations source told CNN.