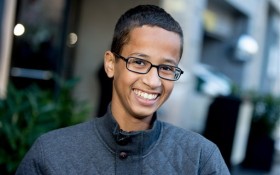 Ahmed Mohamed, the Texas teenager arrested after a homemade clock he brought to school was mistaken for a bomb, capped a whirlwind month with a visit to the White House on Monday.

Ahmed got a personal invitation from President Barack Obama for “Astronomy Night.” The president uses the event to encourage students to pursue careers in science, technology, engineering and mathematics.

Ahmed said he’s OK with the nicknames that so many have given him over the past few weeks — “clock kid” or “clock maker.”

Last month, Ahmed brought the clock to his school to show a teacher, but another teacher thought it could be a bomb. The school contacted police, who ultimately chose not to charge Ahmed with having a hoax bomb, though he was suspended from school for three days.

Obama subsequently tweeted an invitation to Ahmed and said the U.S. should inspire more kids like him to enjoy science.

Ahmed said he has visited Google and Facebook, along with other companies and institutions in recent weeks. He also traveled to Sudan where he met with President Omar al-Bashir, which has prompted some criticism because al-Bashir is wanted by the International Criminal Court on charges of genocide and war crimes for atrocities linked to fighting in Darfur province. Advisers deflected a question on that topic and instructed Ahmed to not answer. Ahmed’s family are Sudanese immigrants and his father is a former presidential candidate.