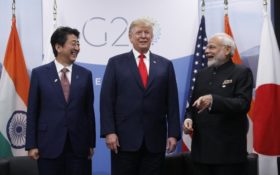 After teaming up with the leaders of Canada and Mexico on Friday to sign a revised North American trade pact, President Donald Trump said on Friday that he hopes the U.S. and Japan can balance their trade deficit “very quickly.”

The president acknowledged that the U.S. is doing a lot of trade and other business with Japan, but that he wants faster progress on reducing the trade imbalance.

Before taking office, Trump often criticized U.S. trade deficits with other countries, since then the president has vowed to turn around those relationships, including by imposing tariffs.

Trump discussed the U.S.-Japan trade relationship as he sat down with Japanese Prime Minister Shinzo Abe in Argentina where they are attending a summit of rich and developing nations.

Abe congratulated Trump on a “historic victory” in the November congressional elections with Trump’s Republican Party expanding its Senate majority.

The prime minister also acknowledged that the U.S.-Japan alliance “has become more robust than ever” under Trump.

After discussing Japan, Trump touched on whether or not he planned have a discussion with Saudi Crown Prince Mohammed bin Salman the summit in Argentina,

He explained that they have not yet had a discussion, but they might.

Relations between Washington and Riyadh are tense in the wake of the brutal killing of Jamal Khashoggi, a columnist for The Washington Post. Khashoggi, who had been critical of the royal family, was killed by the Saudis at the nation’s consulate in Istanbul.

A White House official says that so far, Trump has only exchanged pleasantries with the crown prince at the leaders’ opening session just as he did with nearly every leader in attendance.