Afghanistan on verge of collapse - The Horn News 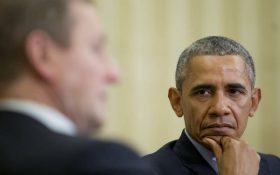 It’s one of the most crucial provinces in Afghanistan – and since U.S. forces have been under President Barack Obama’s leadership, the Islamic Taliban has taken back control of nearly all of it.

Now, Helmand province is on the verge of collapse — and under Obama, U.S. forces in the region aren’t allowed to take action and help.

Hundreds of members of Afghanistan’s security forces have been killed recently fighting insurgent attacks on the main city in the country’s all-important southern province, officials said on Friday.

Abdul Majeed Akhonzada, deputy head of the provincial council, and lawmaker Sheer Muhammad Akhon put the number of soldiers and police killed in the past 10 days in and around Lashkar Gah at more than 200.

Separately, they each said 45 civilians had also been killed in the fighting, which saw Taliban militants launch attacks on at least two areas of the city earlier this week.

Akhonzada and Akhon both say it is the worst situation the province has faced in the 15 years since the Taliban’s regime ended with the 2001 U.S. invasion.

The fighting in Lashkar Gah began on Monday with a suicide attack using a car packed with explosives that killed at least 40 people, including many police officers.

Gunmen then entered the city where fighting has continued, forcing many people to flee the city for neighboring Kandahar province, Akhon said.

He said the U.S. military was present in the city, “but they are just monitoring and doing nothing.” The Americans have a mandate to train and assist Afghan forces in most battlefield situations. U.S. military officials could not immediately be reached for comment.

The Taliban have been gradually taking over Helmand and officials have said they now control around 85 percent of the province.

Helmand is considered part of the Taliban’s heartland, along with Kandahar which was the administrative base of their five-year regime.

Helmand’s poppy crop yields opium that makes most of the world’s heroin. The value of the crop is estimated by the U.N. Office of Drugs and Crime at around $3 billion a year.

Smuggling routes out of Helmand are fiercely guarded by the Taliban as the drugs help fund their insurgency.