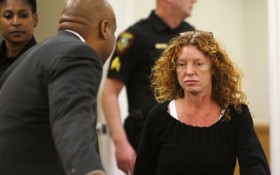 The mother of a fugitive teenager known for using an “affluenza” defense in a fatal drunken-driving wreck has been released from a Texas jail.

Tonya Couch was released on bond from the Tarrant County jail in Fort Worth shortly before 9 a.m. Tuesday. She’s charged with hindering the apprehension of a felon for allegedly helping her 18-year-old son flee to Mexico.

Her son, Ethan Couch, is fighting extradition from Mexico.

A judge on Monday lowered the mother’s bond from $1 million to $75,000. She must wear an electronic ankle monitor and remain at the home of her 29-year-old son, Steven McWilliams, except for appointments with her doctor and lawyer.

Authorities believe the pair fled as Texas prosecutors investigated whether Ethan Couch violated his probation in the 2013 wreck that killed four people. During the trial, a defense witnesses said the teen was coddled into a sense of irresponsibility by his wealthy parents, a condition the expert called “affluenza.”