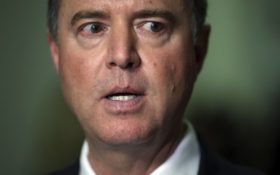 Rep. Adam Schiff, D-Calif., former chair of the House Intelligence Committee, is being accused of censorship amid new revelations from the Twitter files released by Elon Musk.

“This would explain why Twitter could never give me a reason for suspending my account, even though I had broken none of its rules,” Sperry wrote in a New York Post column.

“I have never promoted any ‘QAnon conspiracies.’ Ever. Not on Twitter. Not anywhere,” he told the New York Post, calling the accusation “a scurrilous smear.”

He also said he knew the real reason Schiff’s office wanted him removed: He reported on the identity of the whistleblower that provided information used in the first impeachment against then-President Donald Trump.

“Schiff was just angry I outed his impeachment whistleblower and tried to get me banned,” Sperry told the Post. “I challenge Schiff to produce evidence to back up his defamatory remarks to Twitter.”

Taibbi’s documents also show that Twitter executives pushed back on the various demands from Schiff’s office.

“We don’t do this,” one person, whose name is blocked out, wrote in response to one of those requests.

Sperry notes he was eventually booted anyway – and suspects Schiff’s office may have kept up the pressure. He told told Fox News host Brian Kilmeade that he was considering legal action, including a potential defamation lawsuit.

The left has long defended the attempts to silence conservative voices on social media, insisting that it’s not censorship since Twitter and similar companies are private firms, not government agencies.

Former Twitter CEO Jack Dorsey said after the platform banned Donald Trump in 2021 that “a company making a business decision to moderate itself is different from a government removing access,” although he admitted the result “can feel much the same.”

A lengthy analysis of the issue by CBS Market Watch last year also pushed the narrative that Twitter’s bans and de-platforming efforts weren’t censorship since, again, it’s a private company.

CBS said it would be different if the government were telling Twitter what is and isn’t allowed on the site – which, as it turns out, could be exactly what’s happening here.

“Schiff’s actions embody the slippery slope of censorship,” Jonathan Turley, attorney and law professor at George Washington University, wrote for The Hill after the latest revelations.

By labeling his critics as QAnon supporters or purveyors of ‘misinformation,’ he sought to have allies in social media ‘disappear’ critics like Sperry — yet he found that even those allies could not stomach his demands. Given Twitter’s censorship of even satirical sites, it was akin to being turned down by a Kanye West podcast as being too extreme.

It’s hardly the only case of a government official trying to silence critics on social media.

Taibbi wrote on Twitter that there was an “astonishing variety of requests from officials asking for individuals they didn’t like to be banned.”

The evidence had been mounting even before Musk took control over Twitter and began releasing the behind-the-scenes files to Taibbi and other reporters.

The state of Missouri, for example, has been locked in a legal battle with the Biden White House over the issue. The state’s attorney general, Andrew Bailey, has filed a series of documents in court including government emails showing how the administration tried to bully social media companies such as Twitter into removing content it didn’t like.

The issue won’t be going away anytime soon: The Republican majority in the House has promised multiple hearings and investigations. New House Oversight Committee Chair James Comer (R-Ky.) has already called on former Twitter officials Vijaya Gadde, Yoel Roth and James Baker to testify in a planned hearings about the censorship of information on Hunter Biden.

Those are set to begin the week of Feb. 6.

Schiff may have to watch from home: House Speaker Kevin McCarthy, R-Calif., has promised the California Democrat will be booted off committees, saying he “has lied too many times to the American public.”