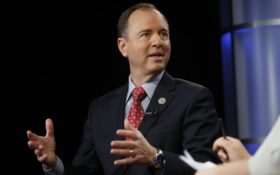 The top Democrat on the House Intelligence Committee Adam Schiff held an eight-minute long phone conversation last year with foreign spies who promised to provide him with naked photos of President Donald Trump.

The only problem? It wasn’t foreign spies Schiff was colluding with against our president. It was Russian radio disc jockeys playing a prank.

The conversation took place on April 10th of last year, but was not reported on until last month by The Atlantic.

The radio hosts pretended to be Ukrainian politicians, and stupid little Schiff well into their hilarious prank.

The Daily Mail published audio of the call on Tuesday. You can listen to it here —

During the phone call, the pranksters made claims that Trump had an affair with Russian singer and model Olga Buzova while in Moscow in 2013.

“She got compromising materials on Trump after their short relations,” the caller told Schiff.

And instead of hanging up the phone and handling himself like a professional politician, Schiff asked what the compromising materials were. This liberal was out for blood.

“Well, there were pictures of naked Trump,” the caller said, adding that Russian President Vladimir Putin was made aware of the “images” by Ksenia Sobchak — a Russian journalist he described as “the goddaughter of Putin.”

The pranksters then assured Schiff that they could provide proof of Sobchak and Buzova discussing the images. They also claimed that former national security adviser Michael Flynn met with a Russian singer in a Brooklyn cafe to discuss keeping the photos under wraps.

Fox News reported that, “a spokesman for Schiff told The Atlantic that the committee reported the call to “appropriate law enforcement and security personnel” and told them “of our belief that it was probably bogus.””

“This would never happen in Russia,” one of the pranksters said of the prank calls. “People wouldn’t be so trusting, especially if they are a member of parliament or a civil servant.”

Keep in mind the irony — liberals set out to destroy Donald Trump, Jr. for allegedly meeting with Russians over dirt they had on former secretary of state Hillary Clinton.

Schiff is the ranking member of the intelligence committee. He does not seem that intelligent to me.