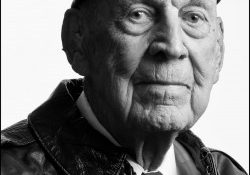 It may not have been the largest battle of World War II — but in many ways it was the most daring, and one of the most important.

The Doolittle Raid of April 1942 was America’s first retaliation for the Japanese attack on Pearl Harbor just four months earlier. Brave volunteers who didn’t even have enough gas to return to safety bombed the Japanese mainland and sent a message that America was in the fight for the long haul.

Three airmen were killed during the battle, and four more died after being taken captive by the Japanese after they ditched their planes in China.

Just one Doolittle Raider is still alive — and today is his birthday.

Richard “Dick” Cole was the famed James Doolittle’s co-pilot, and today he turns 101.

Cole is the last of a great crop of heroes, and there are two ways you can honor him today.

“I was alive in World War II and fought with the Marines all over the Pacific and was badly wounded on Iwo Jima,” said veteran Don Yates. “Those Raiders gave our nation hope and especially to all of us fighting. We remembered what a daring mission they took part in and many of us realized the enemy was not as invincible as we once thought.”

God bless Richard Cole and all of our veterans.