Across the country, nervous Americans await results - The Horn News 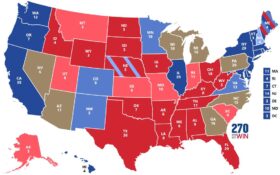 With a bitterly divided America failing to deliver a decisive result for either party, a jittery public awaited clarity Wednesday over the fate of a race that remained too early to call.

Across the country, sleep-deprived voters kept TV screens tuned to newscasts while refreshing maps checkered with blue and red that delivered no clear answers.

“There will be a lot of confusion, a lot of chaos,” said Lewis Stevens, 47, a graphic designer and film producer in Detroit who voted for former Vice President Joe Biden. “I’m anticipating court legal battles, the whole nine yards.”

Votes were still being counted across the country and likely will be for days to come as Biden and President Donald Trump both remain short of the necessary 270 electoral votes to win.

Nothing was out of the ordinary in that process beyond a predicted surge of mail-in votes, but the lack of certainty wore on a public exhausted by a seemingly endless campaign, and all the attacks, vitriol and costly TV commercials that go with it.

The verdict will be delivered by a handful of swing states with razor-thin margins likely to lead to recounts and legal challenges. Voters there took deep breaths, coaxed themselves into sanity or otherwise sought refuge from the perplexity and possible further delays.

Jason Klemm, a 49-year-old actor in Philadelphia, sipped vodka from a 7-Eleven cup Wednesday morning in Rittenhouse Square, trying to ease his nerves after staying glued to television coverage until 4 a.m., then rising after a nap. As returns continued streaming in, Klemm felt better than he did a few hours earlier that his candidate, Biden, could prevail, but he knew it would fall short of what he’d hoped for.

“I would have liked a miracle last night but it didn’t happen,” said Klemm, whose state showed Trump leading with many votes still uncounted. “But every time I walk away and come back later, it’s a little bit better for Biden.”

In North Carolina, where Democrats clung to hope despite a lead for Trump, Kyle Holland, an 18-year-old student voting in his first election, thought his choice of Trump would prevail.

“I think he looks in pretty good shape. I mean, it’s not gonna be a blowout or anything, but I think he’s gonna be able to get to 270 electoral votes,” said Holland, who lives in Faison, North Carolina.

In Michigan, where Biden held a narrow lead, 78-year-old Jerry Stutzman, who cast his vote for Trump, expressed disappointment about delays in returns but said he wouldn’t lose any sleep over it.

“You’ve got to be careful what you stress over,” the retired businessman said. “I will keep positive. I’m not going to bury myself in the sand. There’s always challenges in the world and you’ve got to learn to live with them.”

Elsewhere in the state, the sentiment was far less calm.

At a Fems for Dems gathering in the affluent Detroit suburb of Bloomfield Hills, women routinely moaned and dropped their heads into their hands as the returns came in throughout the night and early morning, some considering switching from red wine to tequila. Even as they held out hope, they knew they hadn’t won what they wanted: a nationwide repudiation of Trump.

“I honestly feel like I’m going to have a heart attack before the end of this,” said Denice Asbell. “I feel like it’s slipping. I’m scared to say this out loud, but the potential for us to see the win that we wanted is slipping away.”

Asbell’s daughter, 13-year-old Rhegan Stallworth, reflected the angst of a divided country as she braced for the outcome in a country where many don’t understand the beliefs of the opposing side.

“It’s like putting your life in the hands of a nation that you don’t trust,” said Stallworth.