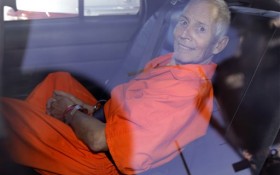 Real estate heir Robert Durst — who appeared to confess to multiple murders at the end of an HBO documentary — is finally facing the music.

Durst will serve 7 years, 1 month in prison on a weapons charge, and will face a separate trial for murder in California.

U.S. District Judge Kurt Engelhardt sentenced Durst, 72, on Wednesday in New Orleans, approving a sentence that Durst had accepted in February as part of a plea agreement. Engelhardt also fined Durst $5,000 and said that his sentence, once served, would be followed by three years of supervised release.

Durst will get credit for time served since his arrest in mid-March last year, Assistant U.S. Attorney Michael McMahon said.

“They always do that,” he said.

Ten years and a $250,000 fine would have been the maximum sentence that Durst could have faced for illegally carrying a .38-caliber revolver after being convicted of a felony. However, Engelhardt noted, a pre-sentence report recommended 12 to 18 months under federal guidelines.

Durst still faces a separate murder charge in California. Durst is charged in Los Angeles with killing a female friend, Susan Berman, in 2000 to keep her from talking to New York prosecutors about the disappearance of Durst’s first wife in 1982.

His attorneys have said repeatedly that he is innocent, does not know who killed Berman, and wants to prove it.

“I have been waiting to get to California about a year so I can state my not guilty plea,” Durst, looking pale in an orange jail jumpsuit, told Engelhardt. “I truly, truly want to express my statement that I am not guilty in the death of Susan Berman.”

Engelhardt said the longer-than-standard sentence was reasonable because the plea deal included agreements with U.S. attorneys in Houston and Manhattan and the Orleans Parish district attorney not to prosecute Durst on a variety of offenses. Those could have carried sentences longer than 85 months, Engelhardt said.

Accepting the sentence “cleared the decks — at a cost,” defense attorney Richard DeGuerin said. “It’s a great cost, but he’s not facing any other prosecutions except what’s in California.”

“This case is and always has been about the accusation that Bob killed his best friend, Susan Berman. He did not kill Susan Berman, he doesn’t know who did, and he’s eager to get to California and prove that,” DeGuerin said.

McMahon and DeGuerin said Durst also will forfeit more than $44,000 found in his hotel room when he was arrested and $117,000 in a package sent to Everette Ward, the name under which Durst had registered, and intercepted by the FBI after his arrest.

He’s likely to leave Louisiana within a couple of weeks, McMahon said.

“He’ll be out of here pretty quickly,” McMahon said, noting that timing and the specific prison that Durst goes to is up to the federal Bureau of Prisons.

Engelhardt recommended that Durst serve his time at FCI Terminal Island, California, about 30 miles from downtown Los Angeles. The location is near the trial venue and has medical facilities Durst needs because of his “advanced age and serious health considerations, including mobility challenges,” defense lawyers wrote in a request filed Monday.

An estranged member of the wealthy New York real estate family that runs 1 World Trade Center, Durst was tracked to New Orleans in March 2015 by FBI agents worried that he was about to flee to Cuba.

He was detained at a hotel on the eve of the finale of a six-part documentary about him, and was arrested early on the morning of the show. “The Jinx” described the disappearance of Kathleen Durst, the death and dismemberment of a neighbor in Galveston, Texas, and Berman’s death.

At the end of the show, Durst is heard muttering, “What the hell did I do? Killed them all, of course.”