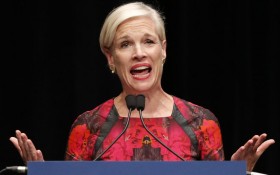 Planned Parenthood filed a federal lawsuit Thursday against the pro-life activists who produced undercover videos targeting the handling of fetal tissue at the organization’s clinics.

But while America’s largest abortion provider is turning to the courts for redemption, it looks like its strategy could backfire and cause even more damage to its public image.

The problem? Planned Parenthood’s lawsuit is simply challenging the circumstances under which the videos were made, seeking damages for “making recordings without consent” and “registering false identities with state agencies.”

But the group seems to no longer be challenging the authenticity of the shocking videos.

The pro-life activists, who named their group the Center for Medical Progress, began releasing a series of covertly recorded videos in July alleging that Planned Parenthood sold fetal tissue to researchers for a profit in violation of federal law.

David Daleiden, a founder of the Center for Medical Progress, said he looked forward to confronting Planned Parenthood officials in court. The civil lawsuit was filed in U.S. District Court in San Francisco.

“My response is: Game on,” he said in an email. “I look forward to deposing all the CEOs, medical directors, and their co-conspirators who participated in Planned Parenthood’s illegal baby body parts racket.”

According to the suit, Daleiden and other defendants used aliases, obtained fake government IDs and formed a fake tissue procurement company, Biomax, in order to gain access to private medical conferences and health care centers, and to tape private professional conversations of medical providers.

The videos provoked an outcry from the pro-life movement, and prompted numerous investigations of Planned Parenthood by Republican-led committees in Congress and by GOP-led state governments. In response, Republicans in Congress and in several states are seeking to cut off government funding to the organization.