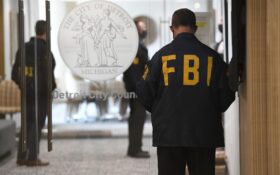 An award-winning ABC News investigative reporter has been reportedly missing since the FBI raided his home in April, according to a stunning new report.

As quickly as they arrived, the FBI agents were gone.

“They didn’t stick around. They took off pretty quickly and headed west on Columbia Pike towards Fairfax County,” a neighbor told Rolling Stone Magazine, and the self described “police-vehicle historian” identified the vehicle the FBI was driving.

“Most people seeing that green vehicle would think it’s some kind of tank. But I knew it was the Lenco BearCat,” he said. “That vehicle is designed to be jumped out of so they can do a raid in that kind of time. It can return fire if they’re being fired upon.”

Neighbors told Rolling Stone that Meek hasn’t been seen around the building since, and his apartment reportedly appears to be vacant.

According to ABC News, Meek suddenly quit the news organization around the time of the FBI raid.  His former colleagues said they haven’t heard from him since.

“He fell off the face of the Earth,” one reportedly said. “And people asked, but no one knew the answer.”

“I just want to know what happened,” another former colleague said. The situation “is making me nervous. I’m just gonna deadbolt my door.”

“He resigned very abruptly and hasn’t worked for us for months,” an ABC News spokesperson told Rolling Stone.

The contents inside one of Meek’s computers may be the reason behind the ABC News star’s disappearance. Insiders reportedly told Rolling Stone that classified information was found inside Meek’s laptop.

His lawyer denied any knowledge of any classified documents in a statement.

“Mr. Meek is unaware of what allegations anonymous sources are making about his possession of classified documents,” Meek’s lawyer, Eugene Gorokhov, said. “If such documents exist, as claimed, this would be within the scope of his long career as an investigative journalist covering government wrongdoing”

“The allegations in your inquiry are troubling for a different reason: they appear to come from a source inside the government,” the statement continued. “It is highly inappropriate, and illegal, for individuals in the government to leak information about an ongoing investigation. We hope that the DOJ promptly investigates the source of this leak.”

According to Rolling Stone —

It is unclear what story, if any, would have put Meek in the FBI’s crosshairs. Meek worked on extremely sensitive topics — from high-profile terrorists to Americans held abroad to the exploits of Erik Prince, the founder of the infamous military contractor Blackwater. In recent years, some of Meek’s highest-profile reporting delved into a 2017 ambush by ISIS in Niger that left four American Green Berets dead. Meek and ABC then adapted the story into the feature-length documentary 3212 Un-Redacted, which debuted last year on Veteran’s Day on ABC’s sister company Hulu.

A robust Emmy campaign began prior to Meek’s disappearance, with events like a screening and Q&A at the Motion Picture Association in D.C. that the journalist attended with one of his daughters. The story was particularly incendiary because it undermined the Pentagon’s official narrative of what happened on the ground in the African nation, and presented “evidence of a cover-up at the highest levels of the Army,” according to the film’s logline. Adding intrigue, sources say another ABC News investigative journalist, Brian Epstein, also abruptly and inexplicably left the network a few months before Meek. Epstein also worked as a director, producer, and cinematographer on 3212 Un-Redacted (Hulu stopped Emmy campaigning after Meek apparently went AWOL, and the documentary ultimately failed to receive a nomination). Epstein told Rolling Stone, “I’m not commenting on this story,” before abruptly hanging up.

Even stranger, in the months before he vanished, Meek was finishing up work on a book for Simon & Schuster titled Operation Pineapple Express: The Incredible Story of a Group of Americans Who Undertook One Last Mission and Honored a Promise in Afghanistan, which he co-authored with Lt. Col. Scott Mann, a retired Green Beret. Meek even featured a picture of the soon-to-publish book in his bio on social media and frequently tweeted about his involvement. But post-April 27, the book-jacket photo disappeared from his bio, and Simon & Schuster has scrubbed his name from all press materials. The first sentence of the jacket previously read: “In April, ABC News correspondent James Gordon Meek got an urgent call from a Special Forces operator serving overseas.” Now it says: “In April, an urgent call was placed from a Special Forces operator serving overseas.”