A Proportional Response to Climate Change - The Horn News 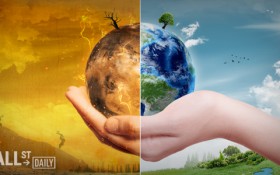 The UN Climate Change Conference represents yet another opportunity for bureaucratic busy-bodies to impose a heavy-handed solution to a problem susceptible like any other in the market to simple price signals.

U.S. President Barack Obama, in concert with like-minded leaders of the European Union, is poised to push for an international treaty focused on global warming at the 2015 United Nations Climate Change Conference.

Indeed, the primary objective talks to be held November 30 through December 11 in Paris is a binding and universal agreement.

Such an agreement could include, if the UN has its way, a new bureaucracy with the power to spend $100 billion worth of taxpayers’ money interfering in the energy market.

Let me be clear: I’m a climate change skeptic, but I’m not a denier.

Now let me explain. I question any attempt by government or supranational organization to interfere where the market is well suited to self-regulate.

While the science behind climate change is now fairly settled, only a much more modest approach can be justified.

Whenever you hear that “97% of scientists” agree about climate change or anything else, you should be deeply suspicious of the speaker’s agenda.

That statistic is spurious; you could barely get that percentage of scientists to agree about the law of gravity.

The reality is that there are huge differences among scientists when it comes to climate change – some of which have to do with their sources of funding.

For instance, governments have devoted huge sums of money to climate change research over the last three decades, and this has ultimately compromised researchers’ skepticism.

The oil company funding in the opposite direction is a mere flea bite by comparison.

We’ve seen a global warming of about 0.7 degrees Celsius in the last century, which accelerated in the 1980s and 1990s, thus producing the first global warming hysteria.

This gentle warming has been paused since 1998 and may remain so until 2030. By 2100, the most likely climate scenario is for a warming of 0.7 to 1.0 degrees Celsius, with a two degree warming being at the very top end of potential outcomes over that period.

An increase of two degrees Celsius by 2100 would raise global sea levels by no more than 70 centimeters or so, an amount that could be mitigated with sandbags in most cases.

On the other hand, the world won’t end in 2100 (we hope), and global warming will presumably continue thereafter if not properly addressed.

At some point, if that happens, the planet will warm up enough – perhaps five degrees Celsius – to raise sea levels substantially and do real damage to agriculture.

So what should we do?

The best solution is a global carbon tax, set at a modest rate to be agreed by treaty. The proceeds would be used to reduce other taxes and/or to address the developed world’s excessive budget deficits.

A carbon tax would incentivize the use fewer carbon-intensive fuels and adopt less consumptive patterns all over the world.

Eliminating government regulations thrown up amid the global warming panic would stimulate growth and reduce deficits.

We must take note of the sharp decline in productivity growth in the United States as well as most of the developed world since 2007 – a slowdown that coincides with an explosion of global warming-related regulations.

Of course it’s unclear how much of this productivity shortfall is due to misguided environmental regulations. We’re also mired in misguided economic policies that have diverted resources into governments through deficits, set interest rates at crazy levels, and caused malinvestment bubbles.

Indeed, it’s likely that the shortfall has several causes.

It is, however, very clear that new bureaucracies, new government-directed funds, and new regulations will exacerbate the productivity problem and deprive us of the growth we need to live good lives and pay for the anti-warming actions that are truly necessary.

With a carbon tax in place, the private sector will produce the new technologies we need to address global warming.

After all, the world is full of entrepreneurs like Elon Musk who are passionately committed to the cause. They should be free to pursue their avocation – but without government subsidies beyond the carbon tax or regulations compelling people to use their products.

We’ve proven in the last decade that the private sector, given sufficient incentives, is entirely capable of producing less carbon-intensive products.

The U.S. light bulb saga is a perfect example.

However, the free market, led by Cree Inc. (CREE), then produced a truly superior product, the LED bulb. The LED bulb has a much longer life, a more pleasant light, and no poisonous mercury wastes.

In solar power, too, Chinese solar panel makers have been able to take full advantage of U.S. regulations originally developed for the U.S. solar industry.

And the consumer is beginning to benefit as solar power becomes truly economic.

The bottom line is this: Price signals do a much better job of steering the economy than regulators.

And for global warming, above all, there’s an urgent need to recognize this.