A new low: Islamic extremists use children as suicide bombers - The Horn News 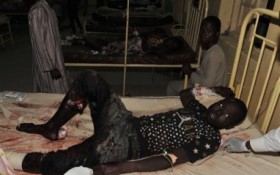 Three suspected suicide bombers between the ages of 10 and 15 years old were spotted by a civilian group set up to fight Boko Haram as the young bombers approached a security checkpoint late Sunday, said Usman. The checkpoint was run by a local group of residents fighting the insurgency is known as the Civilian Joint Task Force.

Usman said that as the suspects were being screened, the explosives were detonated.

A security operative with the civilian group, Adamu Yaghe, said that the youngsters usually have the explosives chained and locked around their bodies in such a way that it would be difficult for someone to remove them should they fail to carry out the mission.

Boko Haram’s 6-year-old Islamic uprising has killed an estimated 20,000 people and driven 2.3 million from their homes, according to Amnesty International and the United Nations.