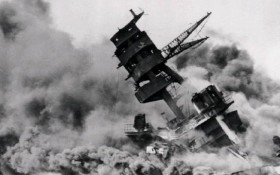 On the island, the National Park Service and the U.S. Navy plan to hold a joint memorial service Monday to mark the 74th anniversary of the attack.

The joint service is a rehearsal for what is expected to be a much bigger memorial service next year to mark the 75th anniversary of the attack by Japan that killed over 2,400 Americans and brought the U.S. into World War II, KITV TV reported.

In previous years, commemorations took place at the Pearl Harbor Visitor Center. This year and next year, the ceremony will be at Kilo Pier. KITV reported. More than 3,000 guests and the general public are expected to attend. Next year’s 75th anniversary will be a much larger event with almost 6,000 people.

The Kilo Pier offers not only more space, but also a better view, Daniel Martinez of the National Park Service told KITV.

“When you look out from Kilo Pier across the way, less than a quarter-mile away, you’re looking at the USS Arizona Memorial and the Battleship Missouri, so it’s a wonderful venue,” Martinez said.

The theme of this year’s historic commemoration is “Pathway to Reconciliation: From Engagement to Peace,” focusing on the rebuilding and solidifying the friendship between the U.S. and Japan.

Relive his powerful speech below –