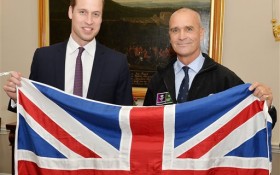 A British adventurer attempting to become the first person to cross the Antarctic alone and unsupported has died after collapsing from exhaustion within miles of his goal.

Former army officer Henry Worsley was just 30 miles (48 kilometers) from the end of the almost 1,000-mile (1,600-kilometer) trek when he called for help and was airlifted off the ice Friday.

His family said Monday that Worsley, 55, died “following complete organ failure” at a hospital in Punta Arenas, Chile. He had undergone surgery a day earlier for bacterial peritonitis —an infection of the tissue lining the abdomen, which can lead to septic shock.

Pulling supplies on a sled, Worsley was trying to complete Ernest Shackleton’s attempt of a century ago to cross the Antarctic via the South Pole. Shackleton’s journey turned into a desperate survival mission after his ship, the Endurance, was trapped and sunk by pack ice in 1915, leaving his team stranded.

His successful bid to reach help at a remote South Atlantic whaling station and rescue his men is considered a heroic feat of endurance.

Worsley’s ancestor, Frank Worsley, was skipper of the Endurance on Shackleton’s voyage.

Henry Worsley decided to abandon his journey Friday after being unable to leave his tent for two days.

“The 71 days alone on the Antarctic with over 900 statute miles covered and a gradual grinding down of my physical endurance finally took its toll today, and it is with sadness that I report it is journey’s end — so close to my goal,” he said in a final statement from Antarctica.

Shackleton’s granddaughter, Alexandra Shackleton, said Worsley’s death was “a huge loss to the adventuring world.” Outdoorsman Bear Grylls said he was devastated at the loss of “one of the strongest men (and) bravest soldiers I know.”

Prince William, a patron of the expedition, said he and his brother, Prince Harry, had lost a friend.

“We are incredibly proud to be associated with him,” William said.