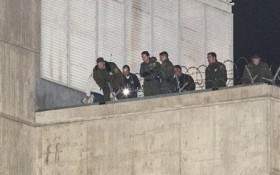 Authorities are fanning out over Southern California in a desperate manhunt for the three violent prisoners whose brazen escape from a maximum-security jail over the weekend has the cops baffled.

It was an elaborate escape: cutting through metal, crawling through plumbing tunnels, climbing a roof, and rappelling four stories to freedom using ropes made from bedsheets.

The priority remains finding the men, whom are possibly armed and considered dangerous.

With the Mexican border being only a couple of hours south of the prison, authorities are scrambling to make sure the men don’t leave the country.

Jonathan Tieu, 20; Bac Duong, 43, and Hossein Nayeri, 37, were all awaiting trial for violent crimes but their cases were unconnected. They vanished from a dormitory they shared with around 65 other men on Friday shortly after the 5 a.m. inmate head count, county sheriff’s officials said.

Somehow, the men obtained tools that allowed them to cut through the quarter-inch-thick grill on a dormitory wall, then got into plumbing tunnels. Cutting their way through additional half-inch-thick steel bars, the trio made their way to an unguarded area of the roof of the four-story building, where they apparently moved aside some razor wire and rappelled to the ground using elaborately braided ropes made from linens, authorities said.

The escape wasn’t noticed for 16 hours, until a nighttime head count that was delayed about an hour because of a fight involving some other inmates that may — or may not — have been part of the escape plan.

Clearly, the plan had been long in the making and carefully thought out, sheriff’s Lt. Jeff Hallock said.

“We’re talking about breaching, in some places, significant amounts of steel, rebar and metal,” Hallock said.

The escaped inmates include 20-year-old Jonathan Tieu, who had been held on a $1 million bond since October 2013 on charges of murder, attempted murder and shooting at an inhabited dwelling. His case is believed to be gang-related.

Hossein Nayeri, 37, had been held without bond since September 2014 on charges of kidnapping, torture, aggravated mayhem and burglary. Nayeri and three other men are accused of kidnapping a California marijuana dispensary owner in 2012. They drove the dispensary owner to a desert spot where they believed he had hidden money and then cut off his penis, authorities said.

After the crime, Nayeri fled the U.S. to his native Iran, where he remained for several months. He was arrested in Prague in November 2014 while changing flights from Iran to Spain to visit family.

The third escaped inmate, 43-year-old Bac Duong, was being held without bond since last month on charges of attempted murder, assault with a deadly weapon, shooting at an inhabited dwelling, and being an ex-felon in possession of a firearm.

Federal authorities are offering $50,000 in rewards for information leading to their recapture.

“We’re in a position where we absolutely need the public’s help,” Hallock said. “There’s people out there that know who these people are, who may have seen them. We’re asking for phone calls, whether it’s any piece of information you may have.”

“We’re exhausting every lead that we currently have,” he said.